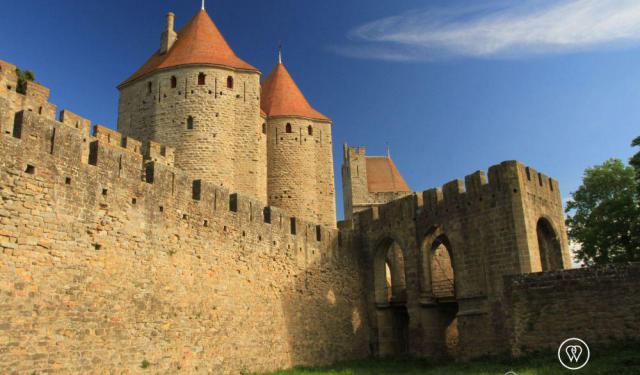 We are standing a few kilometres south of the fortified city of Carcassonne, with the vineyards rolling down from our feet to the base of the majestic ramparts, and the Black Mountain in the background. In Southern France, Carcassonne is a marvel of the Middle-Ages: an entire city completely fortified with its narrow cobblestoned medieval streets, its imposing castle, and gothic basilica. Carcassonne remains the most complete example of French medieval military architecture, and it took about 25 centuries to shape Carcassonne as it is today…

During the Middle-Ages, the Catholic clergy lived ostentatiously and dissident movements appeared. The Cathars became more influential in Southern France, advocating for the return to a pure faith and living in poverty detached from possessions of the physical world. The pope felt threatened and tried to stop this movement that he defined as heretic. When Pierre de Castelnau, a papal legate in charge of stopping the Cathar heretics (also called the Albigensians) in Southern France gets killed, the pope Innocent III announces the crusade against the Cathars. In 1209, French noblemen gather in Lyon and start marching South during a military campaign that will last for 20 years. Most are motivated by economic expansion as the noblemen are entitled to the southern lands they will conquer. The king of France, Philippe II himself joins the crusade as he sees a way of expanding his territory to include the Toulouse area, and diminishing the power of the rival counts of Barcelona. ...... (follow the instructions below for accessing the rest of this article).
This article is featured in the app "GPSmyCity: Walks in 1K+ Cities" on iTunes App Store and Google Play. You can download the app to your mobile device to read the article offline and create a self-guided walking tour to visit the attractions featured in this article. The app turns your mobile device into a personal tour guide and it works offline, so no data plan is needed when traveling abroad.