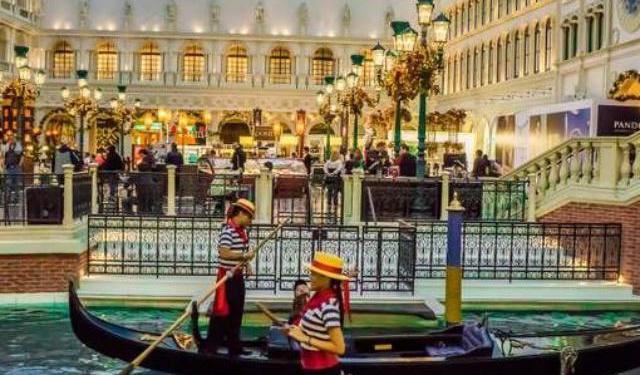 Luxury hotels along the Las Vegas Strip with water fountains, miniature editions of a pyramid, canals of Venice or the Eiffel Tower of Paris. No other place embodies so much glamor, nowhere else are as many movie hotels as in Las Vegas.

In over 100 film productions glamorous Las Vegas themed hotels were used as a location. Unfortunately, some of them have already disappeared, but there are still some where you can follow in the footsteps of well-known films.

The Hotel Bellagio is a glamorous, stylish, very luxurious and one of the most famous hotels in Las Vegas. It is very popular as a movie set and was amongst others the film location of Rush Hour 2, Lucky You, What Happens in Vegas and 2012.

Who knows the Oceans films with Bratt Pitt and George Clooney, knows that it was also the location for some scenes of Ocean’s Eleven and Oceans 13.

The scenes of the film were shot at the casino, the botanical garden and the entrance area with the glass ceiling.

The most well-known scene; however, was shot in front of the hotel at the water fountain where everyone gathered at the end to watch the impressive spectacle. ...... (follow the instructions below for accessing the rest of this article).
This article is featured in the app "GPSmyCity: Walks in 1K+ Cities" on iTunes App Store and Google Play. You can download the app to your mobile device to read the article offline and create a self-guided walking tour to visit the attractions featured in this article. The app turns your mobile device into a personal tour guide and it works offline, so no data plan is needed when traveling abroad.