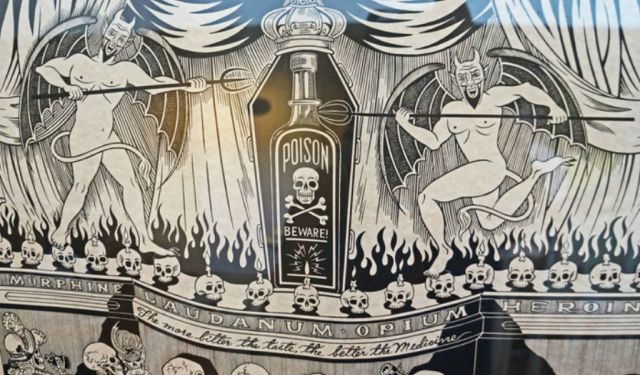 “Miasma.” Owen, our tour guide at the Pharmacy Museum, gave a little shrug. “It’s a fun, spooky word and I recommend using it some time.” And he was right – in my mind, the word conjured up images of dank air swirling around flickering gas lamps, long tendrils grasping after people in Victorian clothes who scuttled away in fear.

In a way, that was New Orleans in the 19th-century, a time where miasma was blamed for the rampant sickness plaguing the city. Yellow fever, cholera, consumption, and venereal disease were everywhere. People were desperate to counteract “the miasma”. The military was even tasked with firing cannons into the nearby swamps in the hopes that it would disperse the miasma. Apparently, that was logical back then.

Unsurprisingly, the canons did not work. People still got sick in droves. “Lucky” for them, there were many remedy options. Many many options. This was because anyone, after a six month apprenticeship, could be a doctor – there were zero regulations, zero ethics. It wasn’t until 1804 that Louis J. Dufilho became the first person to pass the new American licensing exam, making his shop the first in the USA to prove its legitimacy. And it is this shop, today, that holds the New Orleans Pharmacy Museum. ...... (follow the instructions below for accessing the rest of this article).
This article is featured in the app "GPSmyCity: Walks in 1K+ Cities" on iTunes App Store and Google Play. You can download the app to your mobile device to read the article offline and create a self-guided walking tour to visit the attractions featured in this article. The app turns your mobile device into a personal tour guide and it works offline, so no data plan is needed when traveling abroad.