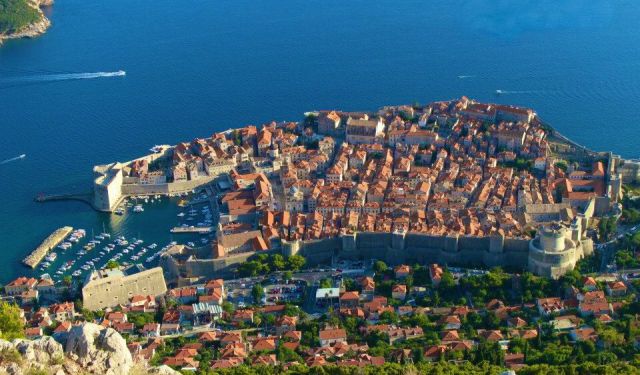 Situated at the very southernmost tip of Croatia, sits the ancient city town of Dubrovnik which is still fortified by massive grey stone city walls. The stunning blue green waters of the Adriatic Sea hug its walls adding to the beauty of a place which seems more like a dream than a reality. It’s no wonder then that this beautiful part of Croatia is considered to be the “Pearl of the Adriatic!”

After the last two years of the city of Dubrovnik as my wall paper on my computer and a country I have been obsessing about visiting for at least the last decade, I couldn’t believe I was finally here. This was the ultimate highlight of our trip was finally making it to Dubrovnik! I had waited so long.

After having just spent the afternoon driving in the car forever from Split to Dubrovnik with a detour to Mostar, Bosnia-Herzegovina, we felt the need to go directly to the nearest swimming hole. It had been incredibly and unbearably hot in Mostar and the heat was no better by the time we reached Dubrovnik. Our hotel was a bit outside of Dubrovnik and I found this much more enjoyable than staying within the city walls. While I would have loved to stay within the walls, by the time we reached Dubrovnik I had had about enough of the massive amounts of people visiting Croatia. ...... (follow the instructions below for accessing the rest of this article).
This article is featured in the app "GPSmyCity: Walks in 1K+ Cities" on iTunes App Store and Google Play. You can download the app to your mobile device to read the article offline and create a self-guided walking tour to visit the attractions featured in this article. The app turns your mobile device into a personal tour guide and it works offline, so no data plan is needed when traveling abroad.