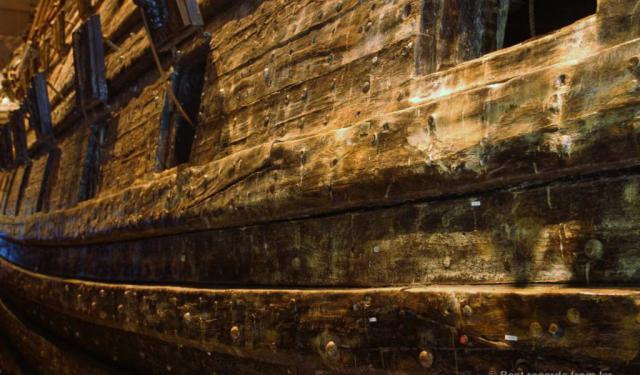 Visiting the Vasa museum (Vasamuseet) is a must do in Stockholm. It is intriguing that the worst ship ever built ever attracts more than a million visitors per year!

The Vasa was ordered in 1625 by Gustavus Adolfus II to impress his catholic enemies and expend his aura as the protestant lion of the North. A very arrogant king, he wanted the Vasa to be the biggest and most impressive ship of the time.

In the beginning of the 17th century, Sweden lacks qualified workers. The king hires a Dutch shipwright, Henrik Hybertsson to build two small and two big warships, including the 69-metre long Vasa. The navy yard is the biggest Swedish company with 400 workers employed by Master Henrik and his Swedish wife Margareta, who collaborate with top-notch naval carpenters from the Netherlands. But the Vasa is a special contract.

After living in Sweden for almost 30 years, Master Henrik has built a good number of vessels. With the Vasa, he starts working on the biggest ship he has ever conceived. But old and weak, he dies in 1627 at 65, before she is completed. ...... (follow the instructions below for accessing the rest of this article).
This article is featured in the app "GPSmyCity: Walks in 1K+ Cities" on iTunes App Store and Google Play. You can download the app to your mobile device to read the article offline and create a self-guided walking tour to visit the attractions featured in this article. The app turns your mobile device into a personal tour guide and it works offline, so no data plan is needed when traveling abroad.