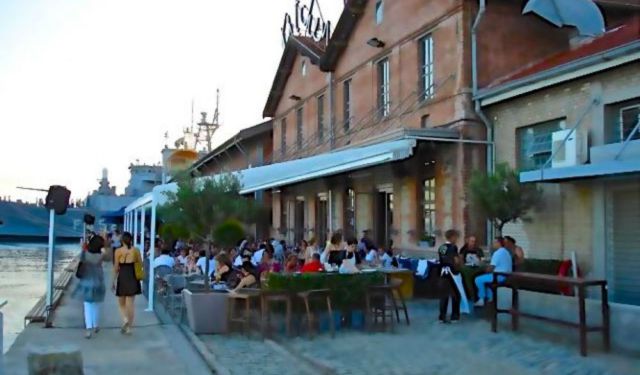 Apart from the many elegant restaurants in the city and the suburbs, there are also numerous "ouzeries" and taverns. Excellent grilled meat and chicken are served at the popular shops along the coast on the outskirts of town Check out the newly renovated Ladadika district near Aristolelous square where there are a number of traditional restaurants and ouzeries on Odos Katouni. This is a working class area similar to Psiri in Athens which has been developed into an area of eating and entertainment. Frommers and Lonely Planet raved about Zythos,Frommers about the food and LP because you can get a pint of Murphy's for not much more than the price of an Amstel. This was one of the first restaurants to open in Ladadikia, way back in 1990. They have another restaurant by the White Tower. I ate at Foul Tou Meze which had a Greek grocery store motif and a large menu, good service, great food and a nice selection of ouzo and tsipuro. Palati has live Greek music as does Vyzantino II. Try also Ta Spata on Aristoleous square, Ta Nicia at 13 Koromila for seafood. Lonely Planet likes O Loutros Fish Taverna at 5-7 Kountoura Miltou street, near Ionos Dragoumi street. ...... (follow the instructions below for accessing the rest of this article).
This article is featured in the app "GPSmyCity: Walks in 1K+ Cities" on iTunes App Store and Google Play. You can download the app to your mobile device to read the article offline and create a self-guided walking tour to visit the attractions featured in this article. The app turns your mobile device into a personal tour guide and it works offline, so no data plan is needed when traveling abroad.