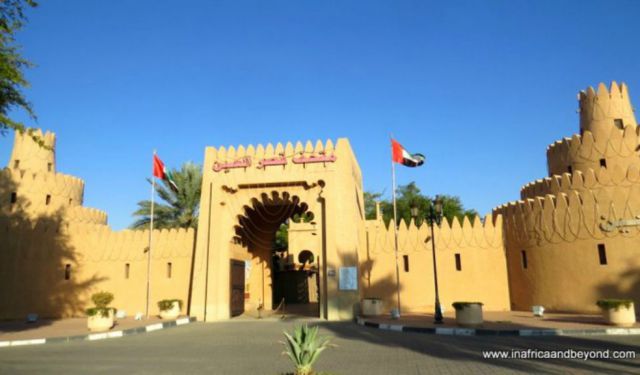 Things to Do in Al Ain, Al Ain, United Arab Emirates (B)

The Garden City of Al Ain may not be as popular with international tourists as the glamorous, glitzy cities of Dubai and Abu Dhabi, but it is definitely worth a visit. Al Ain is the fourth largest city in the United Arab Emirates (UAE) and one of its oldest cities. It was once an important oasis for travellers on the caravan route between the UAE and Oman. It is also the birthplace of Abu Dhabi’s ruling family. The city is hydrated by natural springs that originate in the surrounding rocky mountains, giving it its name, which means “The Spring” in Arabic.

During our stay in Abu Dhabi, we visited Al Ain on a day tour with Emirates Tours & Adventures. Kanhaiya, our driver, picked us up from the Capital Gate Hotel and we set off on the two-hour drive to Al Ain. The vehicle was spacious and comfortable and Kanhaiya was a treasure trove of information about Al Ain and the rest of the UAE. We learnt a lot about the country from him.

We drove on highways surrounded by the desert, where only jojoba trees grew, and we drove past palm tree plantations too. En route, we stopped to see locals training camels for an upcoming camel race at the Al Marmoum race track. Some of the camels were controlled by robots. Camel-racing is serious business here with more than 150 million Dirhams (approximately 479 million Rands) in prize money. There are more than 200000 camels in the Emirate. ...... (follow the instructions below for accessing the rest of this article).
This article is featured in the app "GPSmyCity: Walks in 1K+ Cities" on iTunes App Store and Google Play. You can download the app to your mobile device to read the article offline and create a self-guided walking tour to visit the attractions featured in this article. The app turns your mobile device into a personal tour guide and it works offline, so no data plan is needed when traveling abroad.