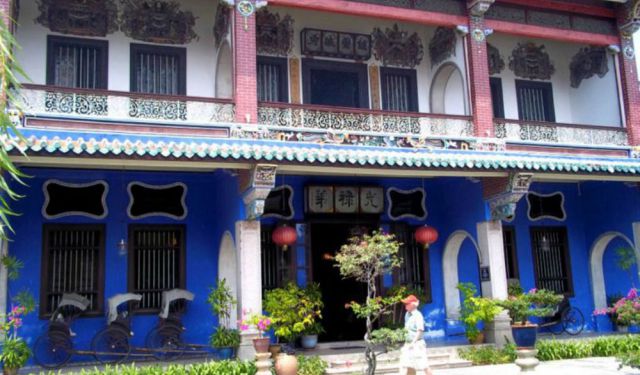 Things to Do in Penang, Malaysia, George Town, Malaysia (B)

Penang is one of Malaysia’s most visited tourist destinations and my favourite city in Malaysia too. Also known as “The Pearl of Orient” it has a lot to offer visitors – history, culture, exotic foods, beautiful beaches and more. There are so many things to do in Penang. Here are some of them.

The capital of Penang, Georgetown, is a UNESCO World Cultural Heritage Site because of its well-preserved historical buildings.

The Cheong Fatt Tze’s Mansion is one of the most iconic boutique hotels in Malaysia and was constructed before the end of the 19th century. It is also called the Blue Mansion because of it’s indigo blue colour. The Chinese-style mansion was the favourite and most lavish home of a famous merchant called Cheong Fatt Tze, also known as the “Last Mandarin and First Capitalist of China”. It incorporates Feng Shui principles and has won several accolades including being named one of the 10 Greatest Mansions in The World by Lonely Planet in 2011. Several famous movies have also been filmed here. You can stay at the hotel for a unique experience. If you are not staying there, you can visit for a guided tour of the mansion. ...... (follow the instructions below for accessing the rest of this article).
This article is featured in the app "GPSmyCity: Walks in 1K+ Cities" on iTunes App Store and Google Play. You can download the app to your mobile device to read the article offline and create a self-guided walking tour to visit the attractions featured in this article. The app turns your mobile device into a personal tour guide and it works offline, so no data plan is needed when traveling abroad.