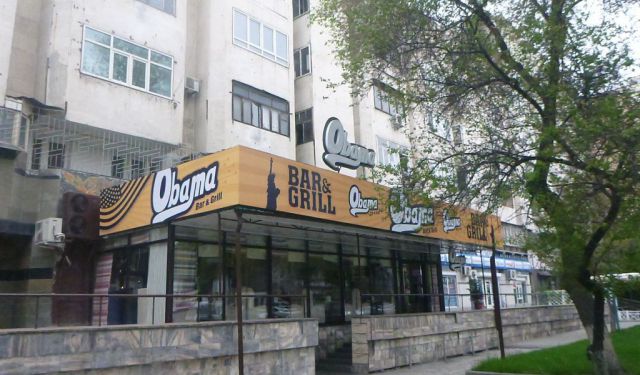 This is long overdue and one of about 1,000 articles that I started and never finished. On my ongoing writing about my base in early 2016, Bishkek, it’s time to explore the pubs and bars of this city. Having been based in Bishkek, Kyrgyzstan from December 2015 – April 2016, I often frequented the bars of the city, working out my favourites, trying as many bars or pubs as I could. I visited over 30 bars and pubs in the city in addition to my favourite Wi-Fi cafes for Digital Nomads. These are my textbook top ten bars in Bishkek, Kyrgyzstan, some of which featured on Bishkek’s First Ever Pub Crawl which I helped organise alongside Apple Hostel. Pints ahoy, Bishkek is a rocking cool city and if I had followed my afterworld instinct and headed from France to Bishkek instead of to Poland, I wouldn’t have experienced the recent depression. That aside, get visiting these bars.

The first ever pub in Bishkek I visited is still my favourite – Pinta Pub. I heard that they had live football, local beers on tap and good Kyrgyz food. I popped in on my first night in the city and they showed Arsenal v. AFC Bournemouth on TV. ...... (follow the instructions below for accessing the rest of this article).
This article is featured in the app "GPSmyCity: Walks in 1K+ Cities" on iTunes App Store and Google Play. You can download the app to your mobile device to read the article offline and create a self-guided walking tour to visit the attractions featured in this article. The app turns your mobile device into a personal tour guide and it works offline, so no data plan is needed when traveling abroad.