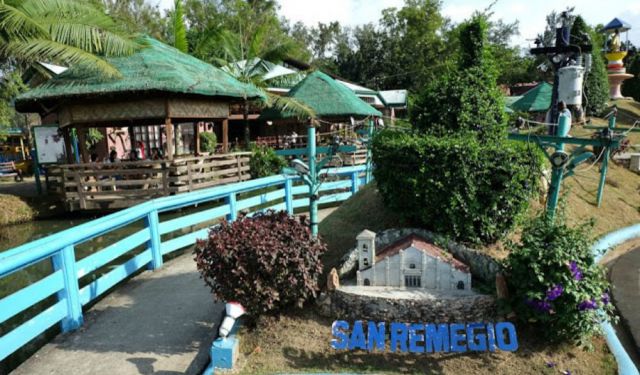 Forty-five kilometers west of Cebu City or a 1-hour/100-peso van ride that cuts across the width of the province lies the city of Toledo, where one can take a barge to get to the province of Negros Occidental. But wait, don't go aboard the barge yet. Spend some time checking out this city's little gems.

A pleasant surprise awaits history buffs in Toledo City. Sitting just behind the unused Toledo City Hall are World War II foxholes, silent witnesses to a significant time. These foxholes were built in 1942 and were used by the United States Armed Forces in the Far East (USAFFE). You can read more about it here.

This park by CEBECO (Cebu Electric Cooperative) is the local teenager's hangout. The park is not especially big, but it is free for use and has open cottages built over a pond. What charmed me though were not the open cottages nor the pond, but the island in the center of the pond: the island of Cebu! Every city and municipality of the province is represented and it was like touring the entire province in just a few dozen steps. ...... (follow the instructions below for accessing the rest of this article).
This article is featured in the app "GPSmyCity: Walks in 1K+ Cities" on iTunes App Store and Google Play. You can download the app to your mobile device to read the article offline and create a self-guided walking tour to visit the attractions featured in this article. The app turns your mobile device into a personal tour guide and it works offline, so no data plan is needed when traveling abroad.