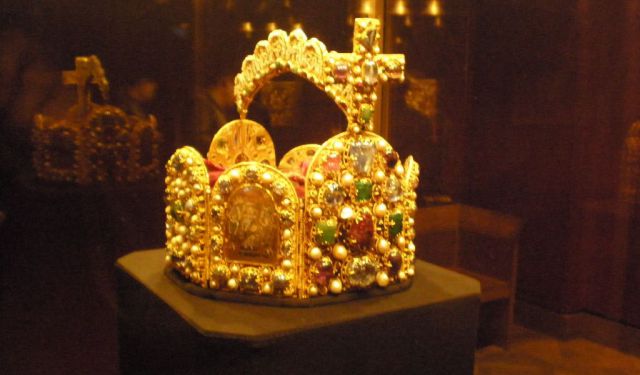 Top 10 of the Imperial Treasury Vienna, Vienna, Austria (B)

Who hasn’t dreamt of becoming a king or a queen when growing up? We were all brought up with stories and fairy tales about valiant princes and beautiful princesses. However, being an actual royal is something completely different, especially nowadays. Nevertheless, seeing real royal treasures can still be very enchanting ( and educational). On my recent visit to Vienna ( last month) I got to admire the priceless crowns and other immensely beautiful objects in Kaiserliche Schatzkammer Wien (Imperial Treasury) before I enjoyed a delicious cake at yet another Viennese cultural institution: Café Central.

Imperial Treasury Vienna is housed in the oldest part of the Hofburg Palace in the center of Vienna (the royal palace of Habsburg family who ruled over Austria and much of Central Europe until 1918). Imperial Treasury may not be the most interactive or family friendly museum but it is one of the most important treasuries in the world containing secular and ecclesiastical objects of immense cultural and historical value. The museum is affiliated with the Kunsthistorisches Museum Vienna, which is just a short walk from the Hofburg Palace. The museum’s collection was compiled by the Imperial House of Habsburg over the course of centuries but it has only been opened to the public as a museum since 1954. ...... (follow the instructions below for accessing the rest of this article).
This article is featured in the app "GPSmyCity: Walks in 1K+ Cities" on iTunes App Store and Google Play. You can download the app to your mobile device to read the article offline and create a self-guided walking tour to visit the attractions featured in this article. The app turns your mobile device into a personal tour guide and it works offline, so no data plan is needed when traveling abroad.