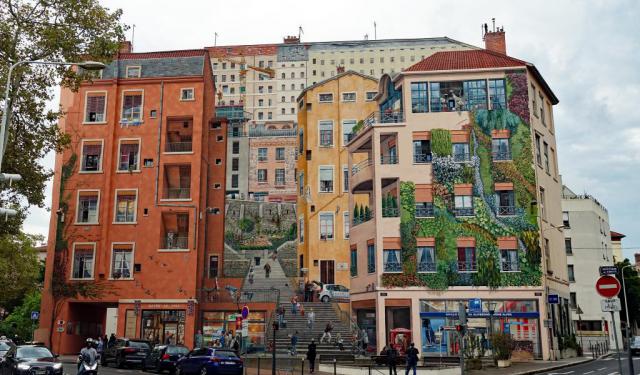 There are so many beautiful, spectacular, impressive mural painitngs in Lyon, check out at least those top 20 unmissable I have selected for you.

In Lyon the walls tell stories. I could not think of a better use of the walls. Especially, since the wall paintings in Lyon turned out to be beautiful.

The idea of mural paintings came from a group of local students who in the early 1970s were discussing the closed nature of the art world and came to the conclusion that the murals can bring art to ordinary people. A group of ten students went to study modern wall painting in Mexico, where Diego Rivera had launched a new artistic tradition in the 1920s with a series of storytelling murals. CitéCréation, their student cooperative movement, was born. Today the collective is based in the suburb of Oullins south of Lyon. And today, we have over 60 officiel mural paintings, many unofficial and the overall number is growing…Because, there are so many of mural paintings in Lyon, even i haven’t seen half of them. That is why, I picked up the most important, the most beautiful, the really unmissable mural paintings in Lyon that I highly recommend:  ...... (follow the instructions below for accessing the rest of this article).
Image Courtesy of Allie_Caulfield.
This article is featured in the app "GPSmyCity: Walks in 1K+ Cities" on iTunes App Store and Google Play. You can download the app to your mobile device to read the article offline and create a self-guided walking tour to visit the attractions featured in this article. The app turns your mobile device into a personal tour guide and it works offline, so no data plan is needed when traveling abroad.