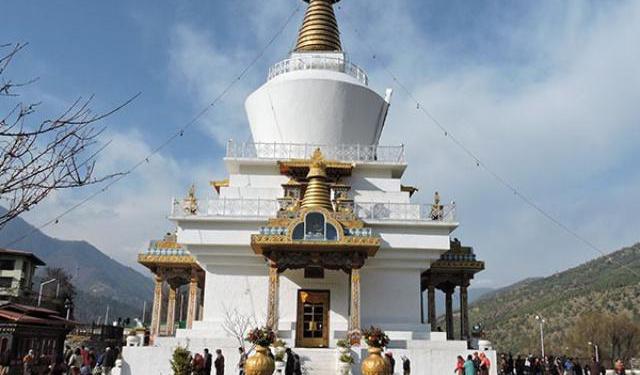 Oh, what an entry of mine was in Thimphu, Bhutan! The beat sounds were coming from the Clock Tower Square, where I found some performers on stage singing, the place is crowded. The whole city in a festive mood celebrating Losar with the first ever Bhutan International Festival 2015. One of the cleanest, well maintained and lovely city Thimphu in Bhutan impressed me much during my two days here. Among various tourist attractions in Thimphu, I’ll love to recommend some to explore during your Bhutan trip. Yes, what had I really explored from the capital and what are the top six places to visit in Thimphu? Details inside.

It was a winter afternoon, with a heavy cold. For two nights I did stay at Hotel Destiny, a standard budget hotel which is pretty near to the Thimphu city heart Clock Tower. After finishing lunch took a quick move exploring this largest city of the Himalayan Kingdom.

The modern versus traditional capital city Thimphu is a combination of beautiful nature and many religious or spiritual landmarks with old designed architectures. All keep faith in Buddha thought and so Prayer Flags and Prayer Wheels are very common things you will find everywhere and mostly in any Dzongs and Monasteries. One interesting fact about Prayer Flags, ‘More Prayer Flags moving in the air means more Dharma (religion) increase in the air‘ (came to know from my Bhutanese Guide Kumar). ...... (follow the instructions below for accessing the rest of this article).
This article is featured in the app "GPSmyCity: Walks in 1K+ Cities" on iTunes App Store and Google Play. You can download the app to your mobile device to read the article offline and create a self-guided walking tour to visit the attractions featured in this article. The app turns your mobile device into a personal tour guide and it works offline, so no data plan is needed when traveling abroad.