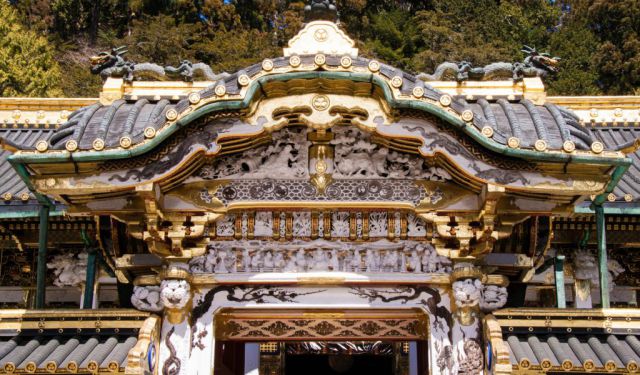 More than 1 000 years ago, a Buddhist priest named Shodo Shonin crossed the Daiya River on his way to Mount Nantai and founded the first temple at Nikko. Today, 103 buildings and structures make up an area known as the “Shrines and Temples of Nikko”, a UNESCO World Heritage Site. After our drive up to Kegon Falls, John and I headed back into town to see one of the site’s most prominent shrines, Toshogu (東照宮).

Unlike the simple architecture of most of Japan’s shrines and temples, Toshogu is exquisitely ornate, decorated with gold leaf, bright lacquer paints and intricate carvings. The mash up of Buddhist and Shinto elements with a strong Chinese influence is a circus of texture and color, for which appreciation varies according to personal taste: some love it, others hate it. I found it fascinating.

The Nioman Gate, guarded by two Nio figures who represent the first and last letter of the Sanskrit aplhabet – one open-mouthed for “ah” and one closed-mouthed for “un”. ...... (follow the instructions below for accessing the rest of this article).
This article is featured in the app "GPSmyCity: Walks in 1K+ Cities" on iTunes App Store and Google Play. You can download the app to your mobile device to read the article offline and create a self-guided walking tour to visit the attractions featured in this article. The app turns your mobile device into a personal tour guide and it works offline, so no data plan is needed when traveling abroad.