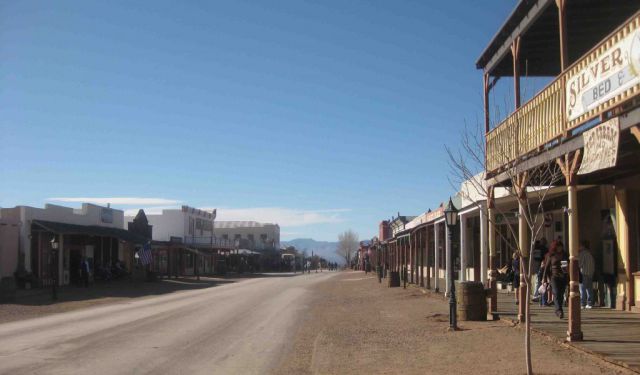 Today was mostly a travel and blog day. Petey and I left Las Cruces and headed toward Tucson to stay with my Aunt Diane and Uncle Mike for a few days. On the way, we were greeted by signs such as “Caution, Dust Storms May Exist” and “Zero Visibility Possible”. I was thankful for a sunny day (and so was Zoe). She ran along this part of the highway a few days ago!

Before we reached Tucson, per my step-dad’s recommendation we took one detour to Tombstone toward the Mexico border. The best way to describe Tombstone’s history is to copy it straight from the City’s website:

“The Town too Tough to Die,” Tombstone was perhaps the most renowned of Arizona’s old mining camps. When Ed Schieffelin (SHEF·e·lin) came to Camp Huachuca (hwah·CHEW·kuh) with a party of soldiers and left the fort to prospect, his comrades told him that he’d find his tombstone rather than silver. Thus, in 1877 Schieffelin named his first claim the Tombstone, and rumors of rich strikes made a boomtown of the settlement that adopted this name. ...... (follow the instructions below for accessing the rest of this article).
This article is featured in the app "GPSmyCity: Walks in 1K+ Cities" on iTunes App Store and Google Play. You can download the app to your mobile device to read the article offline and create a self-guided walking tour to visit the attractions featured in this article. The app turns your mobile device into a personal tour guide and it works offline, so no data plan is needed when traveling abroad.