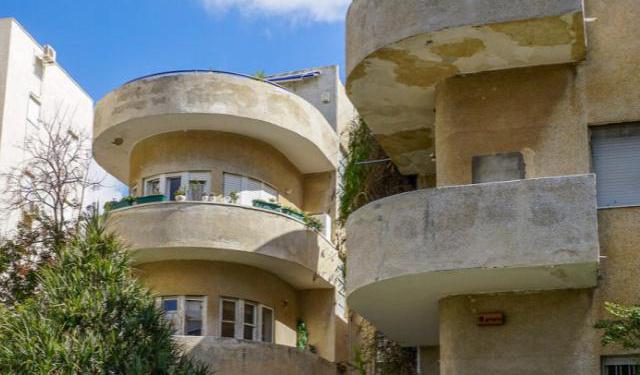 Tel Aviv is completely different from most of the other cities that tourists visit in Israel. While it does feature the city of Old Jaffa, Tel Aviv is very new, vibrant and cosmopolitan relative to many others in Israel. Though a big city, it doesn’t take more than a day to explore the sites.

Although it is a bit north of the central attractions, The Cinema Hotel, is located on Dizengoff Square about equidistant between Rothschild Street and the Tel Aviv Art Museum, the two must-sees of the city. The hotel used to be an old movie theater and is decorated in a cinema theme with old cameras and film clips. It has great views of the city and even offers free popcorn as an afternoon snack. Book on Hotels.com

Tel Aviv is easy to get around by oneself (though easier with the knowledge of Hebrew). Regardless, I always like getting the perspective from the local guide. Page and I joined TLV Walking Tours led by Yaniv.

Yaniv is Jewish and mentioned in a previous post about Bethlehem and the Palestinian plight, that I would discuss the Jewish point of view as well. So below are a few things I learned. From the Jewish perspective the Jews were in Israel first. Albeit that was 3,000 years ago, and Jerusalem was left in ruins for some 500 years, but “they were here first”. In addition, the Israeli’s won the Six Day War in 1967. As a result, they rightfully have the land. Jews also say they provide everything to the Palestinians like water, sewer, electric, and internet, though without adding my own opinion, I understand the Palestinians suffer from shortages, and it is not equal. ...... (follow the instructions below for accessing the rest of this article).
This article is featured in the app "GPSmyCity: Walks in 1K+ Cities" on iTunes App Store and Google Play. You can download the app to your mobile device to read the article offline and create a self-guided walking tour to visit the attractions featured in this article. The app turns your mobile device into a personal tour guide and it works offline, so no data plan is needed when traveling abroad.