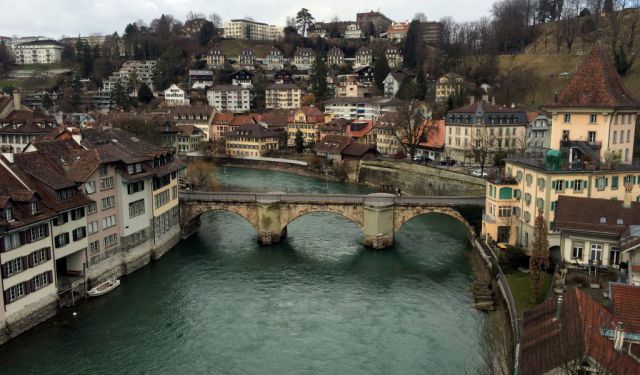 After a glorious week-and-a-half in France, we hopped on the train and headed to the land of the Swiss! From Toulouse, we took a six hour train ride to Geneva, and then we switched trains for another 2.5 hour journey to Bern! Bern was a special stop on our trip because we celebrated two occasions two days in a row – Daniel’s birthday and then Valentine’s Day!

Bern ended up being our favorite city in Switzerland. It felt like a small Swiss town with all of the big city amenities. It has amazing public transportation and has beautiful winding streets to wander in. We also had an overall more fun experience here than in other Swiss cities, primarily because we splurged on our special occasion dinners. For the rest of our time in Switzerland we made ourselves stick as close to our budget as we could, which meant eating some McDonalds meals and finding all the free activities possible.

We had four days in this wonderful city. We spent a lot of time wandering and taking everything in, but we did make it to a few great attractions and restaurants that I recommend, and we took an incredible day trip that I highly recommend if you have more than a couple of days in Bern. We were lucky enough to have picked a weekend during Carnival, their version of Mardi Gras. The big Carnival parade happened on Daniel’s birthday, so we had fun people-watching and pretending they were all celebrating his birthday. ...... (follow the instructions below for accessing the rest of this article).
This article is featured in the app "GPSmyCity: Walks in 1K+ Cities" on iTunes App Store and Google Play. You can download the app to your mobile device to read the article offline and create a self-guided walking tour to visit the attractions featured in this article. The app turns your mobile device into a personal tour guide and it works offline, so no data plan is needed when traveling abroad.