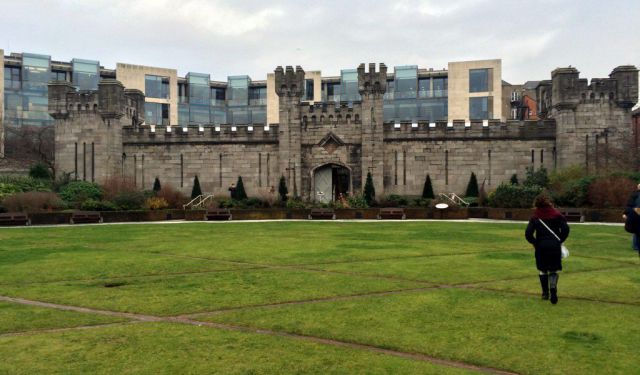 Travel with Me / Dublin in Three Days, Dublin, Ireland (B)

Oh, Dublin…. I have been dreaming about going to Dublin and the rest of Ireland for as long as I can remember. Growing up, each time I was asked what my ultimate dream trip would be, I usually said it was Ireland. Obviously, Ireland was the first country on my list when we decided to do our big trip around Europe, and choosing to spend time in the capital city was a no-brainer. So, after taking the ferry from Scotland to Northern Ireland, we took a bus from Belfast to Dublin and stayed there for three nights.

All of my expectations of Dublin and the rest of Ireland were formed from what I had seen in movies (Once and P.S. I Love You) and what I had read in books (anything by Maeve Binchy). I imagined that as I passed through the streets of Dublin, I’d encounter lots of friendly Dubliners walking by to the soundtrack of both Irish ballads performed by hopeful street performers and Celtic medleys spilling out from pubs. I expected a small-town vibe in a small city. Well, I was right about everything except for one thing – Dublin is not a small city. There are over 1.2 million people living in the city, but, in my opinion, it somehow manages to keep a small-town feel. ...... (follow the instructions below for accessing the rest of this article).
This article is featured in the app "GPSmyCity: Walks in 1K+ Cities" on iTunes App Store and Google Play. You can download the app to your mobile device to read the article offline and create a self-guided walking tour to visit the attractions featured in this article. The app turns your mobile device into a personal tour guide and it works offline, so no data plan is needed when traveling abroad.