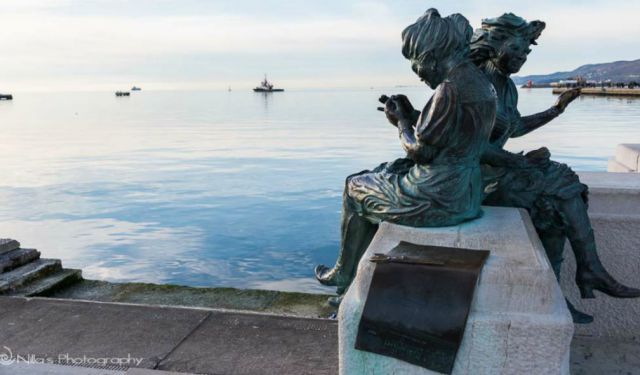 Trieste in a Day: North-Eastern Italy, Trieste, Italy (B)

With only a day to spare, this will have to be enough time to explore Trieste, Italy’s north-eastern port city.

A leisurely day in Trieste sounded like an excellent way of escaping the hoards in Venice on the last day of Carnivale.

Trieste is about a 2-hour trip East from Venice (€25 return) on a comfortable and cosy warm train. Sit, relax, and enjoy the ride of mostly flat scenery dotted with quaint farm houses…until you near the city’s built-up suburbs.

Positioned on the Adriatic Sea and almost at the end of a slither of Italian territory, the Slovenian border is only some 3 kilometres away. The Croatian border is about 15 kilometres south of Trieste.

To be honest, I haven’t. Nor have I met many travellers that avidly seek this city out on their bucket list ‘to see’ destinations.

Another reason for visiting is that my mother’s family was from Fiume (I think) but lived in Trieste. Fiume (now Rijeka, Croatia) is one of those unfortunate cities, that was bandied around between empires and countries, depending on which war was on at the time. ...... (follow the instructions below for accessing the rest of this article).
This article is featured in the app "GPSmyCity: Walks in 1K+ Cities" on iTunes App Store and Google Play. You can download the app to your mobile device to read the article offline and create a self-guided walking tour to visit the attractions featured in this article. The app turns your mobile device into a personal tour guide and it works offline, so no data plan is needed when traveling abroad.