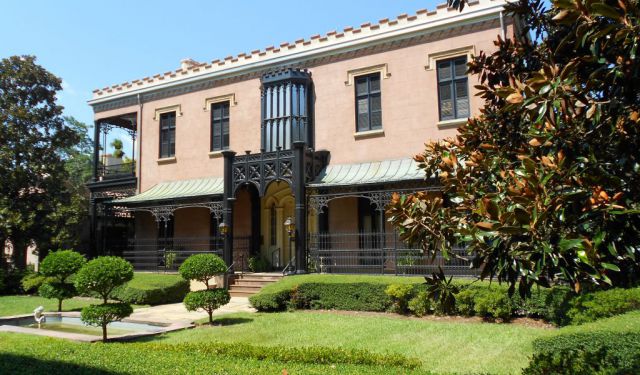 This section will cover the homes and other important buildings on and around Troup, Layfayette, Madison, and Pulaski Squares. From Troup Square travel west along E. Harris, or E. Charlton, to Lafayette, Madison and Pulaski Squares. Among other sites you’ll encounter the childhood home of author Flannery O’Conner, and the Andrew Low House where the widowed Juliette founded the Girl Scouts of America.

Next is the Green-Meldrim House, one of the most famous homes in the city. In 1864, the Union army of General William T. Sherman was approaching Savannah. To protect his home from destruction, Mr. Green rode out to meet the Union commander and invited Sherman to use the Green home as his headquarters while in Savannah.

Laid out in 1851, this square was named for George Troup, former Georgia Governor, Congressman, and Senator. It was Troup who welcomed the French General Marquis de Lafayette on his visit to Savannah in 1825. This and Washington Square are the only two squares named for a person living at the time. ...... (follow the instructions below for accessing the rest of this article).
This article is featured in the app "GPSmyCity: Walks in 1K+ Cities" on iTunes App Store and Google Play. You can download the app to your mobile device to read the article offline and create a self-guided walking tour to visit the attractions featured in this article. The app turns your mobile device into a personal tour guide and it works offline, so no data plan is needed when traveling abroad.