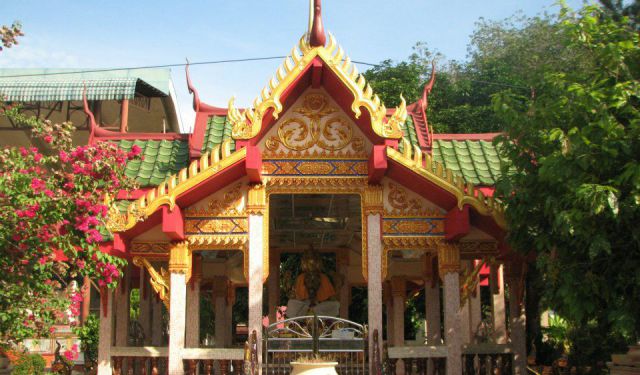 Tumpat – Finding Buddha in the Backwaters of Kelantan, Tumpat, Malaysia (B)

Kelantan is the most intriguing state in West Malaysia – the people has this indeterminable slang that acts as a source of while confusing the rest of the nation, the ruling government has espoused often-controversial Islamic laws like gender segregation in shopping lines and the ever so deliciously cheap food has funny names like “nasi air dingin” (cool water rice) and “nasi tumpang” (shelter rice). The 95% Malay population qualifies Kelantan as part of a northern Malay heartland but its past links with Thailand is inextricable as it is home to a number of aesthetically exquisite Buddhist temples. The temples, commonly known as “wat,” are concentrated in Tumpat bordering the Narathiwat province of Thailand. Here’s a recount of my visit to two Siamese wats the last time I was in Kelantan.

Probably the most conspicuous wats of them all, Wat Machimmaran has the largest sitting Buddha statue in Malaysia with a height of 30 meters and width of 18 meters on a base of a giant lotus. The imposing Buddha rises above the wooden kampung houses and paddy fields to be among the lanky coconut trees as you make your way towards the border town of Pengkalan Kubor. The drive from Kota Bharu is interesting in itself as you will pass by many mosques and madrassahs that constantly reminds you of Kelantan’s Islamic roots before stumbling upon this comparatively grand structure. The temple might seem out of place but it lets out this homely feeling, confidently knowing that it has served many followers and will continue to be of service to the Buddhist community on both sides of the divide. ...... (follow the instructions below for accessing the rest of this article).
This article is featured in the app "GPSmyCity: Walks in 1K+ Cities" on iTunes App Store and Google Play. You can download the app to your mobile device to read the article offline and create a self-guided walking tour to visit the attractions featured in this article. The app turns your mobile device into a personal tour guide and it works offline, so no data plan is needed when traveling abroad.