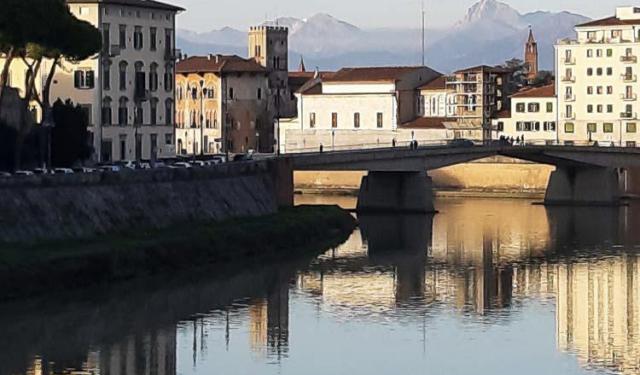 Tuscany’s Pisa – Not All About the Leaning Tower, Pisa, Italy (B)

Visitors flock to Tuscany’s Pisa to share a fleeting moment with the famous Leaning Tower then leave – but Pisa is not all about the Tower.

Eager to explore gorgeous Tuscany over 12 days, Pisa offers cheaper accommodation than surrounding cities and also makes an excellent base for travel.

Pisa’s origins date back to the 5th-century as a trading city with the Gauls and Greeks, and the only ‘trading port between Genoa and Ostia’ in Italy’s west. It’s hard to believe that the sea was much closer to Pisa centuries ago than it is today.

Boasting ‘one of the most ancient universities in Europe’, which dates back to the 12th-century and also one of Italy’s best-approved schools Scuola Normale Superiore that Napoleon founded in 1810, Pisa is also renown as a university town.

Poets and writers such as Lord Byron and P.B. Shelley left inspired by this gorgeous city, which also produced brilliant mathematicians, sculptures, artists, and scientists – think Fibonacci, Pisanello, Redi, and Galileo. ...... (follow the instructions below for accessing the rest of this article).
This article is featured in the app "GPSmyCity: Walks in 1K+ Cities" on iTunes App Store and Google Play. You can download the app to your mobile device to read the article offline and create a self-guided walking tour to visit the attractions featured in this article. The app turns your mobile device into a personal tour guide and it works offline, so no data plan is needed when traveling abroad.