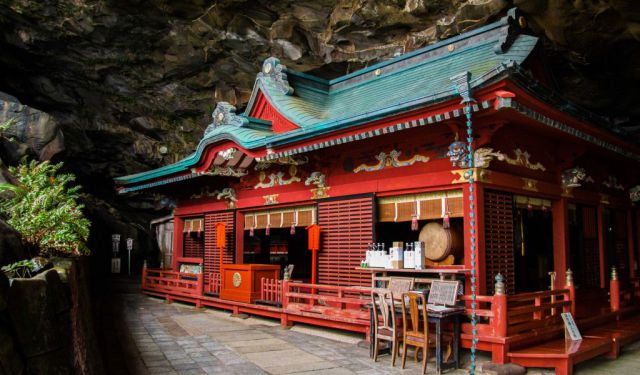 Udo-jingū: A Most Unusual Shrine, Nichinan, Japan (B)

During the Age of the Gods, the daughter of the Japanese sea King Ryujin, Toyotama, lived with her father in the underwater palace of Ryugu-jo. One day, the dragon goddess met a young hunter named Hoori who had come to the bottom of the ocean looking for a missing fishing hook that belonged to his brother. The two fell in love and were married.

After a few years of living together in the palace, Hoori began to long for a life above the sea. He convinced Toyotama to come with him and, pregnant with his child, she agreed. They set up camp inside a cave along the shore and soon after Toyotama went into labour.

Not wanting her husband to see her transform into her alternative form, Toyotama begged him to wait outside. Curiosity got the better of him, though, and he peered in to find a giant black dragon holding a baby. Ashamed, Toyotama fled back to the sea, leaving her breasts behind to feed the newborn child.

Udo-jingū (鵜戸神宮) is located in this mythical birthplace, on the Nichinan Coast, about 40km (25 mi) south of Miyazaki City. The gorgeous, vermilion-lacquered shrine is dedicated to Hoori and Toyotama’s son, Ugayafukiaezu, who grew up to father Japan’s first ruler, Emperor Jimmu. ...... (follow the instructions below for accessing the rest of this article).
This article is featured in the app "GPSmyCity: Walks in 1K+ Cities" on iTunes App Store and Google Play. You can download the app to your mobile device to read the article offline and create a self-guided walking tour to visit the attractions featured in this article. The app turns your mobile device into a personal tour guide and it works offline, so no data plan is needed when traveling abroad.