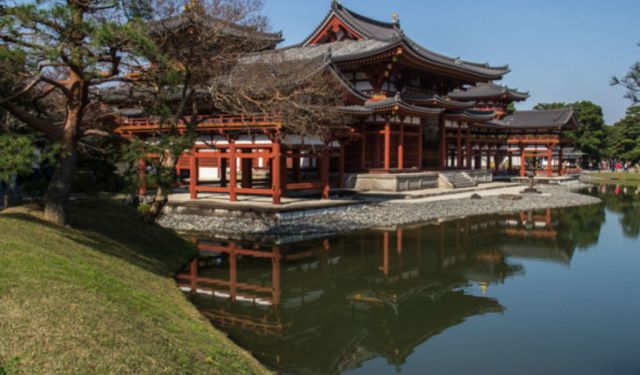 Uji, the Green Tea Capital of Japan, Uji, Japan (B)

Green tea may have originated from China but it is the Japanese who have embraced it wholeheartedly. And where better to take part in a tea ceremony than Uji, the place where it all started? But this little city has more to offer than just tea. Uji is situated between Kyoto and Nara both famous Japanese cultural and historical centres. Due to this proximity Uji also developed as a cultural centre. It was during the Heian Period(794 to 1192) when the Fujiwara family reigned supreme that the Byodoin Temple and Ujigame Shrine were built. Both these buildings are UNESCO world heritage sites. The latter is the oldest surviving shrine in Japan. I started my tour at the Byodoin Temple.

Byodoin Temple is a good example of Jodo or Buddhist Pure Land architecture. Built in 998 it was intended to be a countryside retreat for Fujiwara Michinaga, a powerful politician. His son, Yorimichi Fujiwara, turned Byodoin into a temple and added its most spectacular feature, the Phoenix Hall, in 1053. The hall, originally named Amitabha Hall (national treasure) was added to enshrine a statue of Amitabha Tathagata, also a national treasure. Soon after it was finished the building became known as the Hō-ō-dō which means Phoenix Hall due to its shape and the two phoenix statues on its roof. The garden represents the Pure Land Paradise and has been designated a historic site and a place of scenic beauty. Surrounding the Phoenix Hall, the garden includes a large pond with a sandy beach, two bridges (one flat and one arched and a small island. ...... (follow the instructions below for accessing the rest of this article).
This article is featured in the app "GPSmyCity: Walks in 1K+ Cities" on iTunes App Store and Google Play. You can download the app to your mobile device to read the article offline and create a self-guided walking tour to visit the attractions featured in this article. The app turns your mobile device into a personal tour guide and it works offline, so no data plan is needed when traveling abroad.