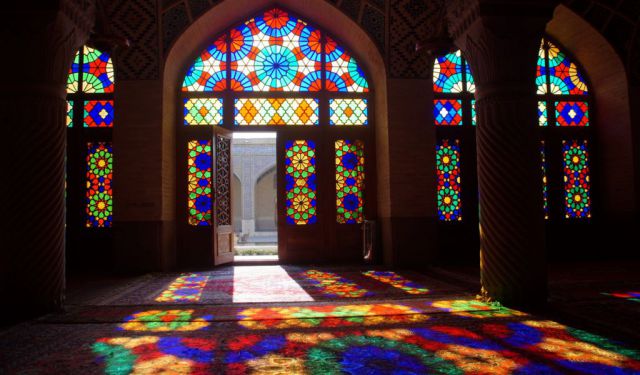 Unique Experiences in the City of Shiraz, Shiraz, Iran (B)

Getting to Shiraz, our next destination after Qeshm Island, went a lot less smoothly than it should’ve. What should’ve been a 7-hour bus ride, turned out to be a 19-hour bus ride, because the bus driver took the longest detour ever and then the bus broke down at 1 AM in the middle of a deserted highway.

When we eventually got to Shiraz, 12 hours later than we had expected, it was almost dark and we were as exhausted as anything. We had wasted a day and for that reason had to cut out Shush from our itinerary, so we could spend the next two days in Shiraz instead, as there was a lot we wanted to see in the city, and we also wanted to visit Persepolis, the ancient ceremonial capital of the Achaemenid Empire.

On our first evening in Shiraz, we met up with Qail from Australia, who we had met briefly in Kharanaq. Qail had met an Iranian guy called Reze, who had invited us all for a traditional dinner at a local restaurant. We had a lovely evening with him and it was inspiring to converse with such a funny and good-hearted person. At the end of the dinner, Reze paid for everything and refused to accept our money. He has no family, so I’m guessing that it was his way to say thanks for company that evening. He was a real character and I’m very thankful to Qail for introducing us to Reze. ...... (follow the instructions below for accessing the rest of this article).
This article is featured in the app "GPSmyCity: Walks in 1K+ Cities" on iTunes App Store and Google Play. You can download the app to your mobile device to read the article offline and create a self-guided walking tour to visit the attractions featured in this article. The app turns your mobile device into a personal tour guide and it works offline, so no data plan is needed when traveling abroad.