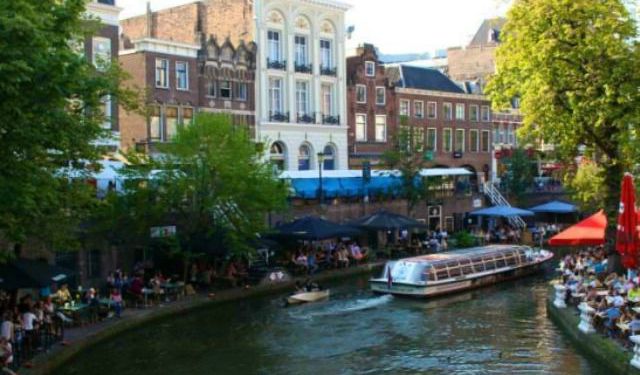 Utrecht: The Less Touristy Version of Amsterdam, Utrecht, Netherlands (B)

It seems like it is becoming more popular to visit the #2 or #3 cities of a country instead of heading straight for the capital city which is over priced, over crowded and a tad too dirty. While Amsterdam is incredibly beautiful and should not be missed while traveling through Holland, it might be more beneficial to just skip all the crowds and head straight for Amsterdam’s little brother, Utrecht.

Despite only being about a 20 minute train ride from Amsterdam, most tourists don’t seem to bother with this little Dutch town that is actually older than the capital! Utrecht has everything Amsterdam has just without the hordes of tourists. It was so peaceful here strolling the Oudegracht (Old Canal) passing cute cafes and restaurants and still getting the contact highs from nearby Coffee Shops.

Unlike Amsterdam, there aren’t as many canals to stroll through, however, the main canal, the Oudegrachtstretched right through the middle of the city. It is a medieval canals that connects the city with the Rhine River. Here, there are shops and cafes which line the lower levels of the canal and there are stretches of the canal that you can walk along. ...... (follow the instructions below for accessing the rest of this article).
This article is featured in the app "GPSmyCity: Walks in 1K+ Cities" on iTunes App Store and Google Play. You can download the app to your mobile device to read the article offline and create a self-guided walking tour to visit the attractions featured in this article. The app turns your mobile device into a personal tour guide and it works offline, so no data plan is needed when traveling abroad.