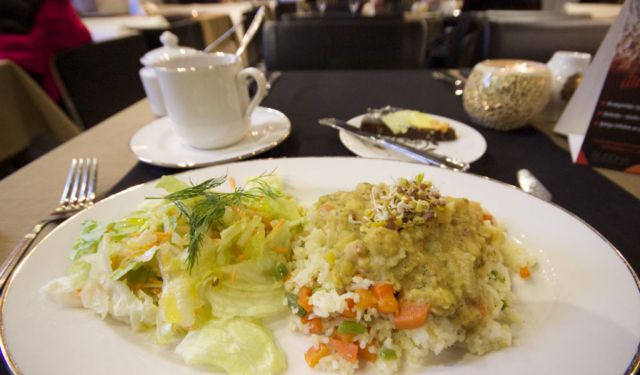 Eastern Europe has always been a meat and potato society. Until recently, the vegetarian and vegan scene is thriving in major Eastern cities. For something chic and affordable try the Buddha Restorans in Riga, Latvia.

After countless hours of walking, I became famished. I make it a point to visit at least one or two vegan / veg restaurants in each city. Now, before vegans go "hay-wire" about supporting a place that may use dairy, just remember Eastern Europe has its financial struggles. Something like soy milk is progressive enough and luxuries that we enjoy in the "west" such as almond milk either doesn't exist or can cost up to five euros per liter.

For about 7.50 euros you can enjoy the lunch special that features a set menu every day of the week. Tea, soup, bread with four kinds of homemade butters, an entree and a dessert is included in the price. It's by the far the best deal (and eating) anywhere east of the Baltic Sea.

The interior features a chic and modern style that is kept tidy and clean. As you enter, you are greeted by friendly staff and welcomed by a large Ganesh statue towering over the booths. ...... (follow the instructions below for accessing the rest of this article).
This article is featured in the app "GPSmyCity: Walks in 1K+ Cities" on iTunes App Store and Google Play. You can download the app to your mobile device to read the article offline and create a self-guided walking tour to visit the attractions featured in this article. The app turns your mobile device into a personal tour guide and it works offline, so no data plan is needed when traveling abroad.