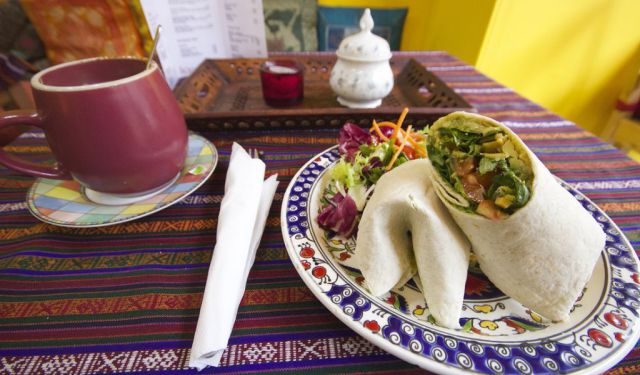 Scotland isn’t exactly the cuisine capitol of the world. From Haggis to shortbread, the only required daily nutrient of a Scottish diet is whiskey. Although it’s improving, word on the street has it that the only vegetable the Scots ate were peas, most likely from a can. Can I survive as a meatless traveler?

Well, my god mate, you can. The Scottish diet and cuisine choices are blossoming. Healthier food choices are a part of the diet and Edinburgh has a thriving vegetarian and vegan scene. In fact, I may have eaten at more plant-based restaurants in Edinburgh than I have in other cities in Europe.

While Britain feels seemingly close to America, to me, Scotland feels more European. In fact, I believe the Scots are proud to be European. You can see it in the streets and can experience it in their mindset and politics. And there was not cuter way than to combine a quaint European café with eastern flare than at the Himalayan café.

Certain things like wraps I feel is very American. In Germany, you survive solely off brot, brotchens and baked goods. Although my tongue bleeds every day for a brotchen, I do enjoy mixing things up. But, pretty much I got accustomed to eating lunch as breakfast. ...... (follow the instructions below for accessing the rest of this article).
This article is featured in the app "GPSmyCity: Walks in 1K+ Cities" on iTunes App Store and Google Play. You can download the app to your mobile device to read the article offline and create a self-guided walking tour to visit the attractions featured in this article. The app turns your mobile device into a personal tour guide and it works offline, so no data plan is needed when traveling abroad.