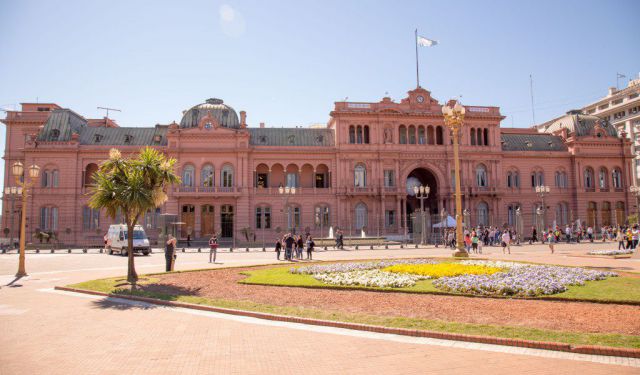 Visiting cities in a rush is becoming an unfortunate theme on here, lately! But fret not, I’ll be returning to Buenos Aires soon enough to give it the proper visit it deserves. However, if you do end up in Buenos Aires without much time to spare, here is one way to see some of its important landmarks in just a half day.

*Please note, to visit these places in a half day you will need to find a form of transportation – bus, subway, cab, Uberor a city tour. You will only be able to spend an hour or less at each stop too (to see them in a half day).

After you’ve downed your cafe con leche and medialunas, head to Plaza de Mayo where some of the biggest events have happened in Argentina’s history.

In the plaza you’ll notice the Pirámide de Mayo – it is the oldest national monument in Buenos Aires. Click here to read more about it.

Also, take note of the many white scarves of “The Mothers of the Plaza de Mayo” in the plaza. Between the years of 1976 and 1983, Argentina was under a military dictatorship (The Dirty War). An estimated 30,000 people “disappeared” (were illegally detained in concentration camps, tortured and likely killed) during this time at the hands of the government. The mothers of the disappeared people gathered in the Plaza de Mayo to try to learn what had happened to their children, beginning in 1977. ...... (follow the instructions below for accessing the rest of this article).
This article is featured in the app "GPSmyCity: Walks in 1K+ Cities" on iTunes App Store and Google Play. You can download the app to your mobile device to read the article offline and create a self-guided walking tour to visit the attractions featured in this article. The app turns your mobile device into a personal tour guide and it works offline, so no data plan is needed when traveling abroad.