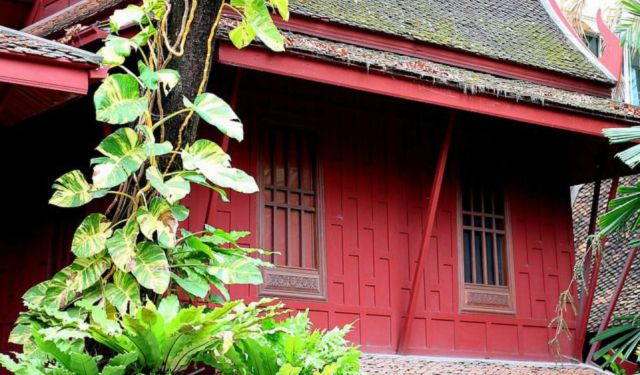 When I was perusing our Bangkok map to see what local attractions were close by, three English words jumped out at me – Jim Thompson House. Who is this Mr Thompson I though, why has he built a house in the middle of Bangkok and why is it marked on my map?

James Harrison Wilson “Jim” Thompson was an American chap who settled in Bangkok after an overseas stint in the US Army during which he fell in love with Thailand.

Using parts of 6 different traditional Thai buildings and relocating them to central Bangkok he created a unique complex of buildings on his estate, now collectively known as Jim Thompson House and open to the public. These were completed in 1959 and he moved in shortly after.

On a visit to Cambodia in 1967 he mysteriously vanished whilst out walking alone. Nobody was ever found or explanation given and several books have been written about his disappearance. Some people still believe he was bumped off by the CIA!

After entering through the main gate (make sure you carry on past the Jim Thompson restaurant) you head to the admissions desk to buy a ticket. At the time of visiting in February 2016 the price was 150 THB per adult (£3), under age 22 100 THB. ...... (follow the instructions below for accessing the rest of this article).
This article is featured in the app "GPSmyCity: Walks in 1K+ Cities" on iTunes App Store and Google Play. You can download the app to your mobile device to read the article offline and create a self-guided walking tour to visit the attractions featured in this article. The app turns your mobile device into a personal tour guide and it works offline, so no data plan is needed when traveling abroad.