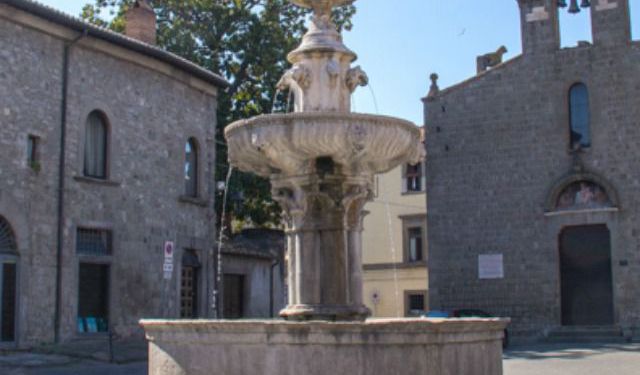 When I arrived in Piazza Martiri d’Ungheria in the Italian city of Viterbo the sun was shining. It illuminated the splendid old buildings marching along the ridge above me. All around me the landscape was spiked with domes and spires. Which way to go? I chose the middle road and headed for Piazza del Plebiscito in the centre of town. Dominating this square are two connected buildings, the Palazzo dei Priori (Town Hall) and Palazzo del Podestà. These two buildings have housed the civic authorities of the town for centuries. Some of the rooms are open to the public. These include a seventeenth-century chapel and the Sala Regia. The latter is decorated with sixteenth-century frescoes depicting myths, legends and the history of Viterbo. A small panoramic courtyard beyond the ornate arch features an elegant seventeenth century fountain and some Etruscan sarcophagus tops. This area was once the centre of the Etruscan civilisation.

Next to Piazza del Plebiscito is Piazza delle Erbe and it was here I found another fountain, the Fountain of the Lions. This fountain, formerly known as St Stephen’s, features four lions with raised paws resting on the city’s coat of arms. The original fountain was built in 1335. It was almost completely rebuilt in 1600 and restored in 1876. Viterbo, is famous for its perfectly preserved medieval quarter where there were once ninety-nine fountains and around twenty public wash houses. This earned the town the title City of Beautiful Fountains. Medieval Viterbo relied on an aqueduct built in 1268 to supply water to the Papal Palace which was located on one of the three hills on which the town was built. An underground system of conduits distributed from there to the southern part of the city where more fountains are found. In particular the fountain del Piano in the neighbourhood of Pianoscarano. The present fountain was built to replace the original fountain that was destroyed in 1376 by the command of Pope Urbano V. This was the result of an incident that occurred involving this fountain and the papal party returning from Avignon. A local woman objected when a servant of one of the cardinals decided to wash his dog in the fountain thereby polluting the drinkable water. A fight ensued during which the woman was killed and the pope subsequently punished the locals by destroying their fountain. The present fountain of Pianoscarano was built in 1376 replacing the original one. This fountain is also decorated with lions, the ...... (follow the instructions below for accessing the rest of this article).
This article is featured in the app "GPSmyCity: Walks in 1K+ Cities" on iTunes App Store and Google Play. You can download the app to your mobile device to read the article offline and create a self-guided walking tour to visit the attractions featured in this article. The app turns your mobile device into a personal tour guide and it works offline, so no data plan is needed when traveling abroad.