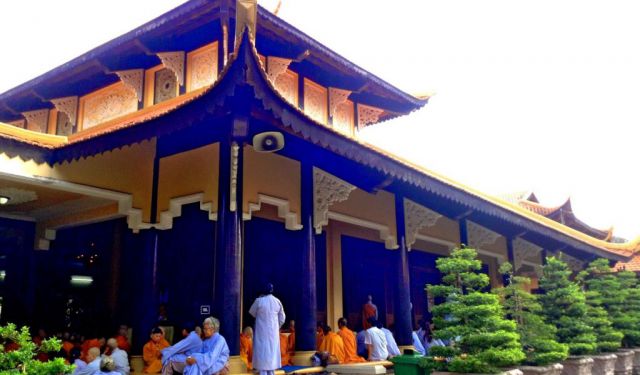 Vung Tau city is located in the south of Vietnam, situated at the tip of a small peninsula. It has traditionally been a significant port, particularly during Vietnam's period of French rule.

Today, the city's importance as a shipping port has diminished, but it still plays a significant role in Vietnam's offshore oil industry.

Vũng Tàu is the only petroleum base of Vietnam where crude oil and natural gas exploitation activities dominate the city's economy and contribute principal income to Vietnam's budget and export volume.

We were fetched from our hotel at 06:30 am by a hired van. On the way, we had a short stop at Thuong Chieu Monestary Zen center for a short break.

Children have partially shaved hair, while adults are fully shaved. Seeing these kids in a suburban place, looks like a summer camp in Buddhist temple!

Upon our arrival to Vung Tau, we drove along Back beach and stop at the foot of the mountain, which we climb up the 1000 steps to see Jesus 's Statue.  ...... (follow the instructions below for accessing the rest of this article).
This article is featured in the app "GPSmyCity: Walks in 1K+ Cities" on iTunes App Store and Google Play. You can download the app to your mobile device to read the article offline and create a self-guided walking tour to visit the attractions featured in this article. The app turns your mobile device into a personal tour guide and it works offline, so no data plan is needed when traveling abroad.