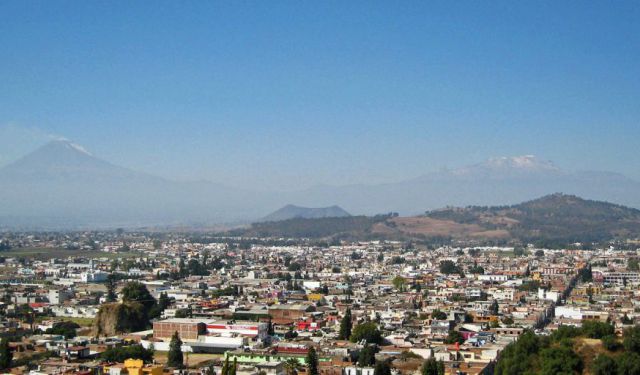 Travel is rife with surprises, both good and bad. Normally, I’m not one for surprises but sometimes, I get one at which even I can’t be annoyed. Part of my trip to Mexico was to visit a friend in Puebla. Close to that city is a place called Cholula. I’d never heard of it but man, was I ever happy to explore it! It had everything I could want – historical sights, food, markets, and people watching. As a surprise location, one that wasn’t on my list of “things to do, places to go”, it was a great reminder why flexible travel plans make for great experiences.

Cholula can be found in central Mexico and the city is the typical colonial style of grid streets, a central square, grand buildings, and a million churches. However, just because the city is clearly colonial, that isn’t all it is – the area has been occupied since about 500BCE! So it’s Hispanic history, while now front and centre as you wander around, is only a drop in the bucket compared to its pre-colonial times. While you can spend a couple days exploring everything to be seen in and around Cholula, here are five highlights you should not miss: ...... (follow the instructions below for accessing the rest of this article).
This article is featured in the app "GPSmyCity: Walks in 1K+ Cities" on iTunes App Store and Google Play. You can download the app to your mobile device to read the article offline and create a self-guided walking tour to visit the attractions featured in this article. The app turns your mobile device into a personal tour guide and it works offline, so no data plan is needed when traveling abroad.