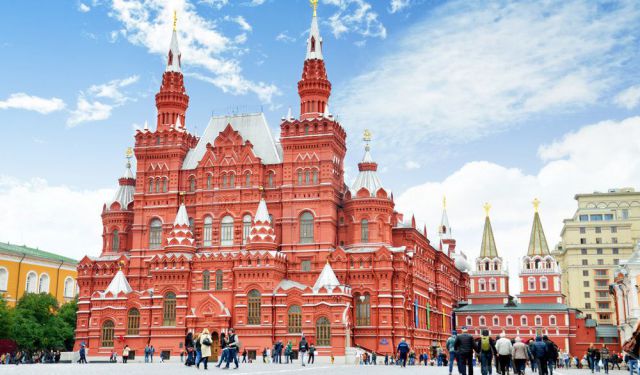 Moscow is the mighty capital of Russia and one of Europe's largest cities. Having read many articles on various blogs and posts about Moscow versus St. Petersburg, I had expected Moscow to have a more rigid, cold and Soviet-style ambience while St. Petersburg was meant to be more European, grandeur and sophisticated. And maybe that's true - St. Petersburg can be easily compared to the large and famous European cities - like Paris or London. Many of the travelers do prefer it to Moscow. For me, however, it was Moscow that appeared more exciting and interesting - maybe because I'm from Europe and the Russian capital was way different to what I was used to.

Although it was early September and we arrived in Russia from nice and summery Vilnius in Lithuania (which by the way turned out to be very interesting, I'll write about it soon), the weather in Moscow was awful. Humid, rainy with bitterly cold wind. Although we'd spent a few days in St. Petersburg right before, and even though it's more to the north, it had been pretty sunny and nice - Moscow was completely different. The buildings and outskirts of the city appeared grey and lifeless. So we thought - first stereotypes about Moscow - bad weather and the ubiquitous grayness were actually true. We didn't know how wrong we were! ...... (follow the instructions below for accessing the rest of this article).
This article is featured in the app "GPSmyCity: Walks in 1K+ Cities" on iTunes App Store and Google Play. You can download the app to your mobile device to read the article offline and create a self-guided walking tour to visit the attractions featured in this article. The app turns your mobile device into a personal tour guide and it works offline, so no data plan is needed when traveling abroad.