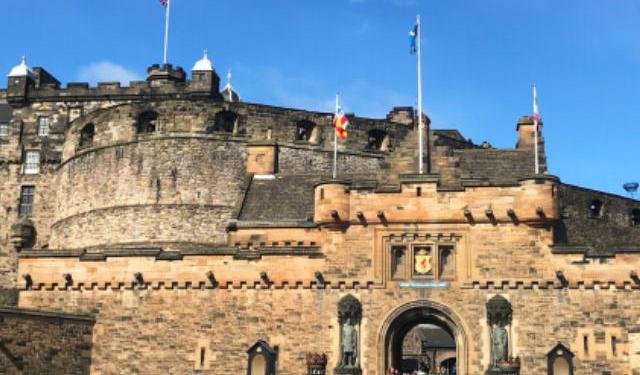 Our time in Scotland ended in the capital city of Edinburgh. Steeped with medieval charm, the city’s skyline is distinguished by a sea of spires and towers that rise up from the labyrinth of cobbled streets in the its historic Old Town. By contrast, the 18th century New Town is made up of a series of broad boulevards and open squares lined with high-end hotels, shops and pubs. Both areas make for an architectural feast that’s easy to explore on foot.

After dropping off our rental car at the Edinburgh airport we hopped on the blue Lothian Airlink bus #100 for the easy 30 minute ride to the heart of the city near Waverly Train Station. It was a Sunday so our first destination was the Stockbridge Market, a weekly market featuring stalls of street food and other artisanal goods. Once we had our fill we wandered through the elegant street of the New Town, admiring the Gregorian buildings along the way. Eventually we arrived at Calton Hill and walked to the top to check out its postcard view of Edinburgh. While the late afternoon sun made for poor viewing, the National Monument of Scotland (an unfinished replica of the Parthenon) with Arthur’s Seat (an extinct volcano that formed Calton Hill and the surrounding area with activity dating back 340 million years) in the distance were worth the climb.  ...... (follow the instructions below for accessing the rest of this article).
This article is featured in the app "GPSmyCity: Walks in 1K+ Cities" on iTunes App Store and Google Play. You can download the app to your mobile device to read the article offline and create a self-guided walking tour to visit the attractions featured in this article. The app turns your mobile device into a personal tour guide and it works offline, so no data plan is needed when traveling abroad.

Create Your Own Self-Guided Walks in Edinburgh
Guide Name: What to See and Do in Edinburgh
Guide Location: Scotland » Edinburgh
Guide Type: Self-guided Walking Tour (Article (B))
Author: Jessica Trumble
Read it on Author's Website: https://boardingpasstraveler.com/2019/12/10/scotland-part-4-edinburgh/
Sight(s) Featured in This Guide: