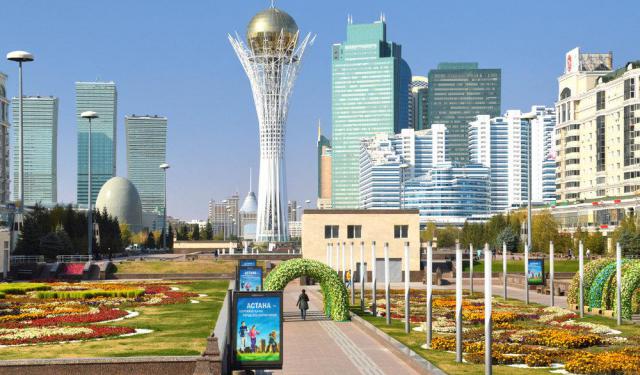 Astana is one of the controversial "brand new" capitals built on an enormous scale - similar to Ashgabat in Turkmenistan or Baku in Azerbaijan. Kazakhstan's capital defies all the presumptions and stereotypes a person from the West might have - especially those set in place after the famous comedy film "Borat" (as a matter of fact, "Borat" was not even filmed in Kazakhstan). Astana couldn't be more different from what you probably imagine Kazakhstan to be like. You won't find carts pulled by cows along muddy streets nor any wooden shacks that are deteriorating and falling apart. Walking through the large main boulevard, you might think you're in one of Dubai's luxurious neighborhoods rather than in some country in the middle of nowhere that no one is interested about.

Astana is an interesting point on the map of Kazakhstan and, I believe, should definitely be visited - however not as the main destination. The most amazing attraction in Kazakhstan is its nature - especially in the south east where the yellow-golden-red desert scenery clashes suddenly with green mountainous landscapes dotted with blue-turquoise lakes. The natural wonders were our main goal. They are all located near the former capital - Almaty. The city of Almaty is not as attractive or unique as Astana, but it's an amazing gateway to the world class spectacular national parks that shouldn't be missed by those who love off the beaten path travel. ...... (follow the instructions below for accessing the rest of this article).
This article is featured in the app "GPSmyCity: Walks in 1K+ Cities" on iTunes App Store and Google Play. You can download the app to your mobile device to read the article offline and create a self-guided walking tour to visit the attractions featured in this article. The app turns your mobile device into a personal tour guide and it works offline, so no data plan is needed when traveling abroad.