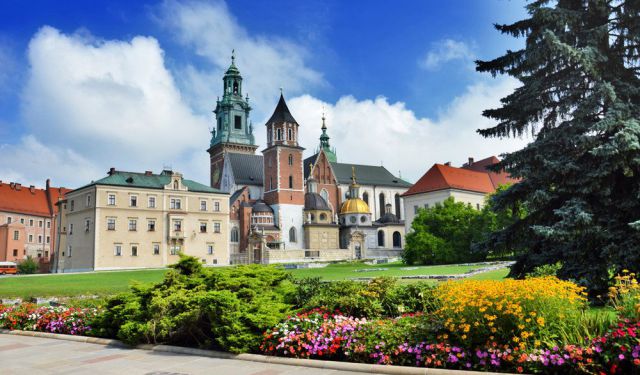 What to See in Cracow - The City With Medieval Charm, Krakow, Poland (B)

Cracow (Kraków in Polish), due to its location, went through enormously difficult times in both ancient and recent history. Squeezed between the Europe's most powerful empires, it suffered invasions, raids and pillages from all directions. Miraculously, unlike Warsaw - the Polish capital, it survived the atrocities of the second world war almost intact, therefore, you can still sense its medieval charm strolling down the colorful cozy streets or having lunch in the largest medieval Market Square in Europe.

Many European airlines offer cheap flights to Cracow's Airport - Balice. It's also very easily accessible from other cities in Poland by bus or train. However, the trains in Poland may be often delayed and quite slow. After arrival in Balice, you can get a special tram that runs between the city center and the airport every 30 minutes - for around 20 PLN (5 EUR/6.40 USD). The return ticket is a bit cheaper. The journey takes only about 20 minutes. Another option, much cheaper (although longer - around 1 hour) is to take a public bus - it will cost less than 4 PLN (0.90 EUR/1.30 USD). ...... (follow the instructions below for accessing the rest of this article).
This article is featured in the app "GPSmyCity: Walks in 1K+ Cities" on iTunes App Store and Google Play. You can download the app to your mobile device to read the article offline and create a self-guided walking tour to visit the attractions featured in this article. The app turns your mobile device into a personal tour guide and it works offline, so no data plan is needed when traveling abroad.