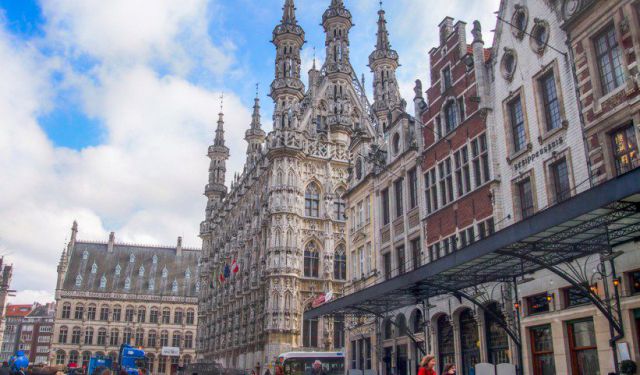 Leuven is both one of Belgium’s least known cities and one of its most interesting cities. It is one of the oldest university cities in the world and the world capital of beer brewing.

That last statement is by no means exaggerated. Leuven is the home base of AB InBev, which is by far the largest brewery in the world—it’s a so-called mega-brewery, first only producing Stella Artois, but now controlling the production of many, most, of the world’s most famous beer brands, including Budweiser, Corona, Beck’s and Brahma. An incredible one out of every type of beers in the whole world is said to be brewed by this Leuven-based brewery. Let that sink in for a second.

It’s easy to see why the combination of the presence of a gigantic brewery and a huge student population—35,000 of them—could be an interesting one. And indeed, Leuven is one of Belgium’s liveliest cities, its Old Market Square sometimes referred to as the “longest bar in Europe.”

Throw in some spectacular medieval buildings, a couple of UNESCO World Heritage Sites, long shopping streets, and some beautiful parks and you’ve got yourself a magnificent travel destination. The University of Leuven is a highlight in itself too, renowned around the world for its cutting-edge research and facilities and its long and rich history. ...... (follow the instructions below for accessing the rest of this article).
This article is featured in the app "GPSmyCity: Walks in 1K+ Cities" on iTunes App Store and Google Play. You can download the app to your mobile device to read the article offline and create a self-guided walking tour to visit the attractions featured in this article. The app turns your mobile device into a personal tour guide and it works offline, so no data plan is needed when traveling abroad.