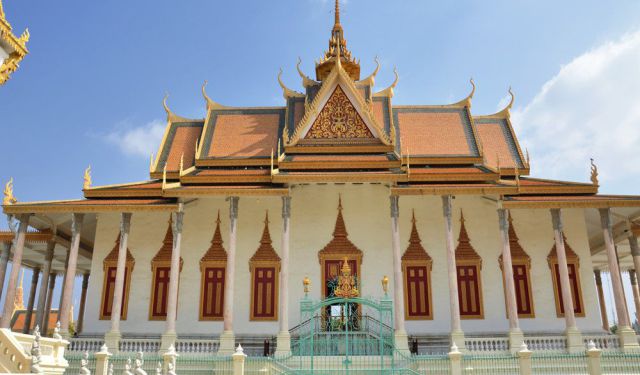 Phnom Penh is a peculiar city. As usual in South East Asia, the Cambodian capital is a mix of perfection, world class architecture and pure chaos. What I liked about it was the fact that Phnom Penh is surprisingly way less popular than cities like, let's say, Bangkok and yet it boasts equally magnificent architecture - such as the Royal Palace and the temples. Phnom Penh is mainly associated with one of the saddest events in the history of human kind - the Cambodian genocide. But now the Cambodian capital has risen from the ashes and should be looked at and admired as an interesting stop during the journey in this fascinating country.

Having been to the extremely popular Angkor Wat Temple complex located in the north of the country (take a look at my post about it), it came as a kind of a shock to see how few tourists were in Phnom Penh. Of course, it made it so much nicer to visit - you don't have to waste time in the queues, squeeze through the crowds and deal with con artists at every corner. Another surprising thing was that the temples and the areas around them were kept in an absolutely perfect condition. The architectural style with all the details was so impressive. But just a few steps away, in the food market and in the less well-off streets, the mess and chaos contrasted strongly with the immaculate Royal Palace grounds. ...... (follow the instructions below for accessing the rest of this article).
This article is featured in the app "GPSmyCity: Walks in 1K+ Cities" on iTunes App Store and Google Play. You can download the app to your mobile device to read the article offline and create a self-guided walking tour to visit the attractions featured in this article. The app turns your mobile device into a personal tour guide and it works offline, so no data plan is needed when traveling abroad.