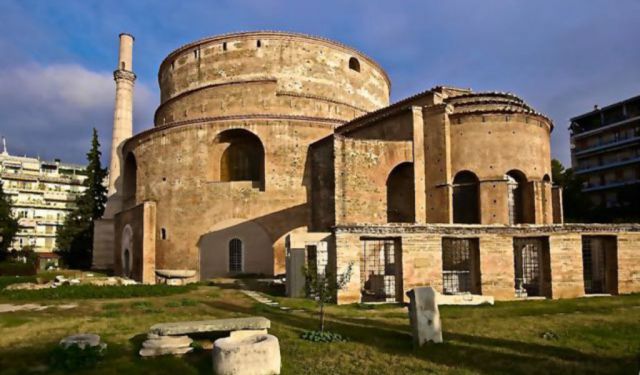 Making pages like this really bore the hell out of me. But with a city like Thessaloniki, which has seen so much history and so many cultures I can't really leave out a page on what to see in the daytime, even if for most people the day is something you have to get through so you can go out at night. Luckily for me I had lots of help with this. No, I didn't walk around to all these places gathering information. When I first wrote this I got the information from actual guidebooks and by the time I updated it the wonders of google had made everything easier. Most of these places are within walking distance if you are staying somewhere central. For those who are looking for something more organized Fantasy Travel's Northern Greece Tour includes Thessaloniki and the most important sites in Macedonia as well as the Monasteries of Meteora.

The Palace of Galerius at Navarino Square, was built by the Roman Emperor Galerius Valerius Maximianus at the end of the 3rd Century. The Galerian Arch (Kamara) erected shortly before 305 AD to commemorate the victory of Galerius over the Persians. The Roman Market and Theatre are located at the Law Court Square (Dikastiria) south of Egnatia street. Also nearby are The Roman Baths just north of the church of Agios Dimitrios and the Nymphaion, an elegant monopteral, circular building. ...... (follow the instructions below for accessing the rest of this article).
This article is featured in the app "GPSmyCity: Walks in 1K+ Cities" on iTunes App Store and Google Play. You can download the app to your mobile device to read the article offline and create a self-guided walking tour to visit the attractions featured in this article. The app turns your mobile device into a personal tour guide and it works offline, so no data plan is needed when traveling abroad.