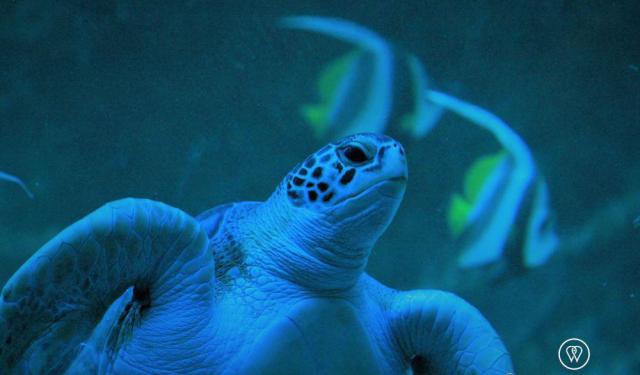 Beyond attracting thousands of people daily to observe the marine life of the cold Atlantic Ocean and the colourful species of the warm Indian Ocean, the Two Oceans Aquarium in Cape Town hosts a rehabilitation centre dedicated to endangered sea turtles.

Clownfish school together. A honeycomb moray eel opens its jaws in a rhythm as if it is play-backing a song. A ragged tooth shark swims by showing its plentiful teeth. Fluorescent-looking jellyfish float as if weightless in space. As we enter a tunnel made of glass, a ray graciously flaps its fins above us, and a turtle appears in the distance. This very turtle we are looking at has been saved from a horrible death thanks to the rehabilitation program of the Two Oceans Aquarium, started back in 2009. Involved as a volunteer for many years, the young and passionate Talitha Noble heads the programme today.

To this day, more than 315 turtles have been successfully rehabilitated and released. Talitha has built a special connection with many of them, especially the turtles that have undergone a long-term rehabilitation: “I’d like you to meet Sandy!”, she enthusiastically exclaims. We arrive at the edge of the exhibit tank in which many species cohabitate for the greatest pleasure of the visitors. Talitha goes down a few steps, kneels, and moves her hand in the water. The surface breaks when a curious turtle swims towards Talitha who is soon stroking her head, neck and shell. ...... (follow the instructions below for accessing the rest of this article).
This article is featured in the app "GPSmyCity: Walks in 1K+ Cities" on iTunes App Store and Google Play. You can download the app to your mobile device to read the article offline and create a self-guided walking tour to visit the attractions featured in this article. The app turns your mobile device into a personal tour guide and it works offline, so no data plan is needed when traveling abroad.