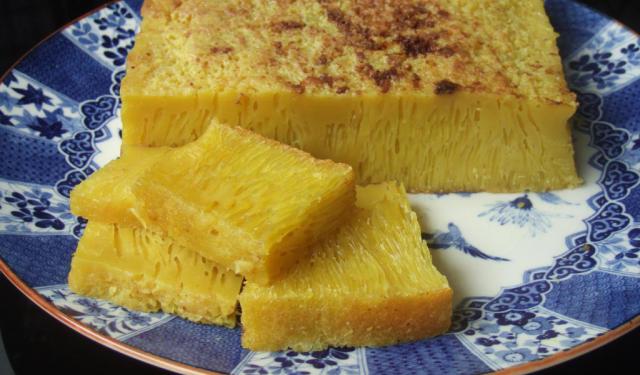 Of all the names this snack goes by (including “Terang Bulan”), Martabak Manis is certainly the one that everyone in Indonesia understands well without confusion. The local spin on a pancake, baked in a pan – pretty much like a crepe, only thicker (more like a crumpet) – it is sweet and spongy on the inside, while crispy on the outside, plus covered in butter or margarine, plus lots of other stuff on top, such as chocolate sprinkles (sometimes even Kit Kat or Nutella spread come into play), crushed peanuts, cheese (or cream cheese), green tea powder (matcha), and more. Prior to serving, martabak is folded in half, so that its toppings end up in the middle. The locals distinguish Sweet Martabak from Egg Martabak (Martabak Malabar). If you've had enough of savoury food, martabak is a good choice!

This traditional Indonesian multi-layered, puffy, spiced cake is easily recognizable by its color stripes (white, green, and red); and it has two varieties: Kue Lapis (steamed pudding) and Kue Lapis Legit (baked layered cake). The latter's ingredients include butter, egg yolks, wheat flour, milk powder, icing sugar and a mix of spices, also known as "spekkeok powder," comprising cardamon, cinnamon, clove, mace and anise. Some variations of Lapis Legit may also include almonds, cashew nuts, cheese, prunes or raisins, and even chocolate and pandanus. While Kue Lapis Legit comprises multiple layers baked separetely and then pressed together for a firm texture, Kue Lapis is a moist, steamed layered pudding made of rice flour and sago. The white color in the cake comes from rice flour and starch; green - from pandan; and red - from a mixed red rose syrup. Each colored layer has the same thickness as a must. In the Netherlands, where this cake also has been popular since the colonial times, it goes by the name of "Spekkoek" which literally means a "pork belly" or "bacon cake" due to its resemblance to the dark and light layers of bacon. ...... (follow the instructions below for accessing the rest of this article).
Image Courtesy of Midori.
This article is featured in the app "GPSmyCity: Walks in 1K+ Cities" on iTunes App Store and Google Play. You can download this article for FREE and read it offline on your mobile device.