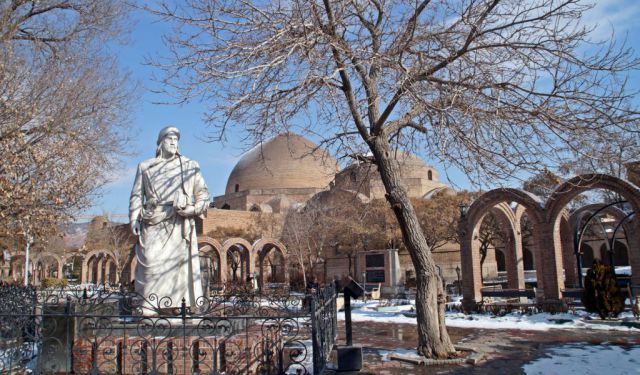 Wintery Days in the Northerly City of Tabriz, Tabriz, Iran (B)

At 2 PM on January 25th, we caught a night bus from Shiraz, and 20 hours later, at 10 AM on January 26th, we arrived in Tabriz, a city in the far northwest corner of Iran. Tabriz is a long way out of the loop of Iran that we had been doing, but we wanted to experience a completely different part of the country as well as the “typical tourist route”, which we had mostly been following thus far.

Waking up an hour before arrival, I was surprised to see the ground covered in snow. Just 5 days earlier, we had been sweating in 25 degrees and extreme humidity on Qeshm Island in the very south of Iran, and now we were almost as far north as we could get, and freezing our butts off at 2 degrees. Also, it was nice to finally see some forrest! It was a welcome change from the endless deserts of central and southern Iran. The north was beautiful!

With 1,6 million inhabitants, Tabriz is the most populous city in the Iranian Azerbaijan area. The population consists mostly of Iranian Azerbaijanis and thus, the culture in Tabriz is quite different from the other cities that we visited in Iran, especially with the most spoken language being Azeri Turkish. ...... (follow the instructions below for accessing the rest of this article).
This article is featured in the app "GPSmyCity: Walks in 1K+ Cities" on iTunes App Store and Google Play. You can download the app to your mobile device to read the article offline and create a self-guided walking tour to visit the attractions featured in this article. The app turns your mobile device into a personal tour guide and it works offline, so no data plan is needed when traveling abroad.