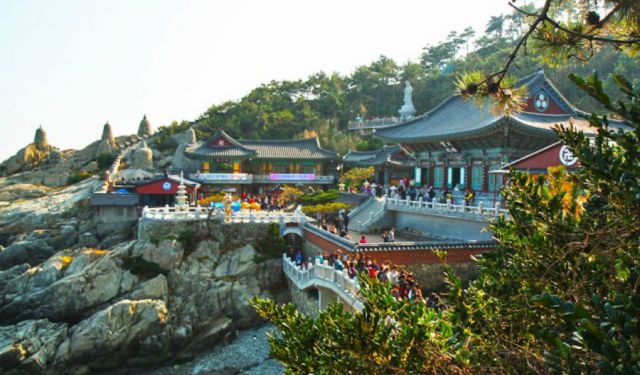 On the morning of my second (and last day) in Busan, my friend and I stood at the curb near the hostel waiting for SangCheol to drive up. I spotted him walking down the street with a shiny black car slowly rolling along, keeping pace with him. We loped over to meet SangCheol and he motioned for us to hop in the car (it was at the same no stopping area as the day before).

SangCheol settled himself on the front passenger seat—the day's self appointed guide. On the wheel this time was ByeongUk (he had arrived the night before, back from a work trip). No rest for the wicked. In this case, no rest for Mustachio's friends. (Hey, don't look at me with accusing eyes! It was their kind and hospitable souls that volunteered to show me around.)

It was a long way to Haedong Yonggungsa Temple. Made even longer when the self–appointed guide snoozed and missed to tell ByeongUk to get off at the right exit. My friend and I laughed and enjoyed the joyride, while ByeongUk sweated bullets trying to figure out where the next expressway exit was so we could go back, and SangCheol squirmed in his seat trying to hold back his pee. (We eventually found a stop with a toilet.) ...... (follow the instructions below for accessing the rest of this article).
This article is featured in the app "GPSmyCity: Walks in 1K+ Cities" on iTunes App Store and Google Play. You can download the app to your mobile device to read the article offline and create a self-guided walking tour to visit the attractions featured in this article. The app turns your mobile device into a personal tour guide and it works offline, so no data plan is needed when traveling abroad.