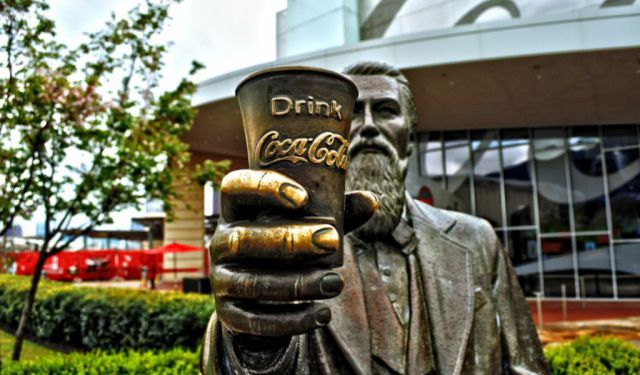 World Of Coca-Cola: Celebrates History Of The Coke, Atlanta, Georgia (B)

The World of Coca-Cola is a museum located in the heart of downtown Atlanta, Georgia. I went there on the Memorial day weekend last month during my trip to Atlanta and had an amazing time! It celebrates the history and culture of Coke, one of America’s favorite soft drinks. The museum is located on a 20-acre complex across Baker Street from Centennial Olympic Park just a few blocks away from where John Pemberton initially created the formula for Coca-Cola. Coke was introduced over 125 years ago in the city of Atlanta and it’s corporate headquarters has remained there ever since.

The World of Coca-Cola offers 90-minutes walking tour where you get an opportunity to explore everything about Coke through more than 1000 artifacts, artworks, video and sound. As soon as you will enter the museum, you will get complimentary coke in a bottle as a welcome drink. Then your tour guide will begin your journey in the World of Coca-Cola by giving a little background about the rich history of the coke. Later, you will enter inside Coca-Cola theater where you will see ‘Moments of Happiness’ – a 6 minutes video which celebrates life’s everyday moments experienced by people around the world. You will feel overwhelmed by seeing the people sharing their joys from the different parts of the world in the video. The doors open once the video finishes, allowing you to explore all of the museum’s offerings by your own. ...... (follow the instructions below for accessing the rest of this article).
Image Courtesy of Ribastank.
This article is featured in the app "GPSmyCity: Walks in 1K+ Cities" on iTunes App Store and Google Play. You can download the app to your mobile device to read the article offline and create a self-guided walking tour to visit the attractions featured in this article. The app turns your mobile device into a personal tour guide and it works offline, so no data plan is needed when traveling abroad.