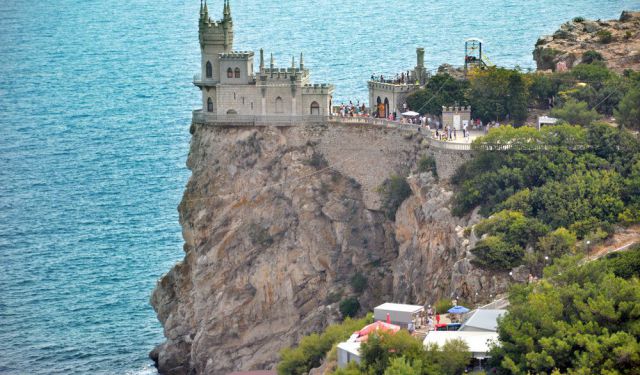 Crimea, together with Russia and Ukraine was completely absent from the attention of the media up until the recent conflict. Recently, it has appeared in western news but, unfortunately, only for the wrong reasons. It's always gloomy and grey with the post-communist, heavy architecture. However, the truth is that looking at the beautiful coast surrounded by golden cliffs and blue waters of the Black Sea, you might get the feeling that you're somewhere in the Mediterranean. For sure not how you would have imagined it! The beaches in Yalta are full of sun seekers, the town itself is so vibrant and colorful and the situation at the peninsula is stable and safe now. Not too mention its greatest attraction - the Swallow's Nest Castle.

It might be a bit tricky to travel in Crimea for an English speaker. The whole experience of visiting that off the beaten path, forgotten place in Europe might give you the impression that you are somewhere far, farther than you would have thought. It's pretty exotic, very attractive, however literally none of westerners ever make it there. I understand that nowadays Crimea and Ukraine are all over the media for all the wrong reasons but when you decide to go out of your comfort zone you'll be awarded with an amazing feeling of discovering something new and unknown. And, how breathtakingly beautiful! People think that for great adventure you must go all the way to South-East Asia! You don't - adventure awaits you so much closer, however it's not what's considered "trendy" in the western world. It's not important that it's stunning and exciting. It's not featured in colorful magazines and people won't go there (or even know it exists!). Yes, you'll see an article about Bangkok in Cosmopolitan but about Crimea? Never. But it doesn't mean it's any less attractive! ...... (follow the instructions below for accessing the rest of this article).
This article is featured in the app "GPSmyCity: Walks in 1K+ Cities" on iTunes App Store and Google Play. You can download the app to your mobile device to read the article offline and create a self-guided walking tour to visit the attractions featured in this article. The app turns your mobile device into a personal tour guide and it works offline, so no data plan is needed when traveling abroad.