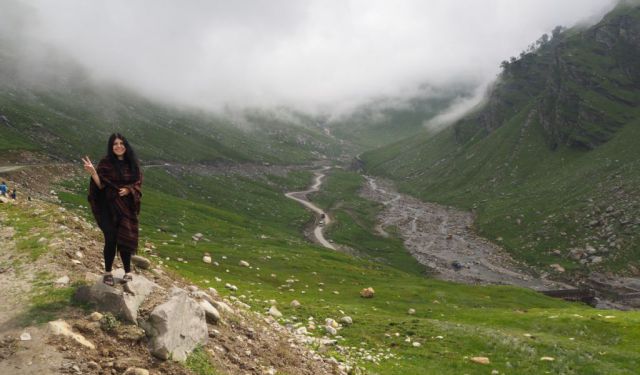 Your Guide to Manali - the Hippie Town in Himachal, Manali, India (B)

Manali was breathtaking. When I arrived from the washout that was Dharamsala, it was so beautiful to finally see some sun! That along with tall mountains and beautiful luscious green scenery all around.

We got off the night bus at the bus stand in Manali at 6am pretty delirious as it was a rough ride. Punjabi music playing all night, a noisy engine and an old bus which could hardly make it around the turns of the winding road wasn’t exactly fun. But, on the upside we made it in one piece.

There are two parts to the world of Manali. These are new Manali, which has the congested Mall Road and is not very pretty and Old Manali which is across the bridge over Beas river. Both are an easy 1km walk away from each other so you can get the best of both worlds!

Old Manali is where all the backpackers and tourists head and use as a base as there is a plethora of funky cafés, restaurants, boho shops and bars to hang out.

Manali was a prominent location on the hippie trail and ever since has been a Himalayan bohemian town. It’s often called the ‘Goa of the north’ as a lot of people escape here from the heavy monsoon rains in the south. You’ll see a lot of the restaurants and cafés have outlets in both Manali and Goa which is pretty cool. ...... (follow the instructions below for accessing the rest of this article).
This article is featured in the app "GPSmyCity: Walks in 1K+ Cities" on iTunes App Store and Google Play. You can download the app to your mobile device to read the article offline and create a self-guided walking tour to visit the attractions featured in this article. The app turns your mobile device into a personal tour guide and it works offline, so no data plan is needed when traveling abroad.