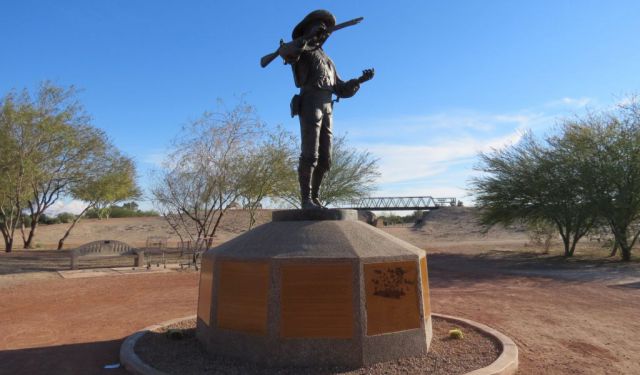 Yuma, AZ — Not Just Passing Through, Yuma, Arizona (B)

If you’re heading to any major city in Arizona from southern California (Carlsbad or further south), you’ll be driving on a route that takes you through Yuma, the southwest gateway of Arizona. A lot of people start their trips planning to blast through to points beyond. But this would be a mistake. Yuma has historically been the place to stop.

Because the Colorado River flows through Yuma, it has always been a gathering place…for Indians, Spaniards, the military, immigrants and pioneers, gold-seekers, and agricultural workers. Here, steamboats, locomotives, stagecoaches and pioneer wagons also converged. The Colorado River is at its narrowest here — only 1000 feet wide, so it became the best place to cross the river. It was the only lower Colorado crossing point for a thousand miles. Yuma Crossing is now a National Heritage site. I guess it should be, since it kind of brought everyone together!

Today, the current population in Yuma is about 200,000, but in the winter months, the population swells to 285,000 as “snowbirds” from northern US and Canada make Yuma home. Yuma has many claims to fame: ...... (follow the instructions below for accessing the rest of this article).
This article is featured in the app "GPSmyCity: Walks in 1K+ Cities" on iTunes App Store and Google Play. You can download the app to your mobile device to read the article offline and create a self-guided walking tour to visit the attractions featured in this article. The app turns your mobile device into a personal tour guide and it works offline, so no data plan is needed when traveling abroad.