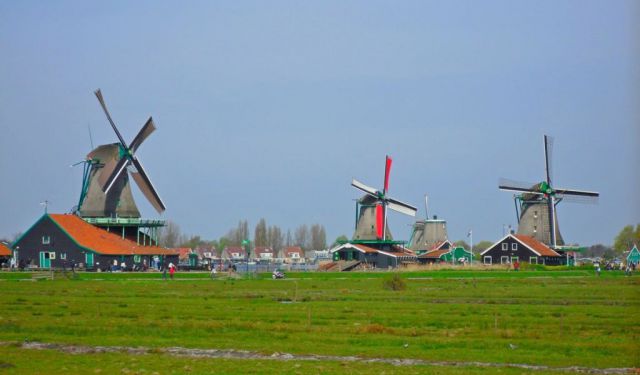 Zaanse Schans – How to Marvel at Imposing Windmills, Zaandam, Netherlands (B)

The gigantic windmills reminded me of Don Quixote and Sancho Panza. But I was neither in a fairy tale, nor was I in Spain. And I was not fighting them, I was admiring them.

If you have ever been to the Netherlands, then, you might know what I am talking about. The country teems with windmills. And today, I am going to narrate you a story of a small place in Amsterdam’s vicinity. It goes by the name Zaanse Schans. And it’s beyond gorgeous. Prepare your wanderlust sneakers and let’s jog around windmills, shall we?

Before we continue our quest of exploring Zaanse Schans, I feel obliged to share several curiously fascinating facts about the tiny country.

1. It is more popular as Holland, although that’s just an area of the Netherlands, consisting of two provinces – North and South (Noord-Holland and Zuid-Holland).

2. Besides windmills, the Netherlands is very popular for its clogs, tulips, and water canals. In fact, Amsterdam has more canals than Venice.

4. According to a report of Oxfam, the low lands, as the name translates, is the healthiest country in the world. ...... (follow the instructions below for accessing the rest of this article).
This article is featured in the app "GPSmyCity: Walks in 1K+ Cities" on iTunes App Store and Google Play. You can download the app to your mobile device to read the article offline and create a self-guided walking tour to visit the attractions featured in this article. The app turns your mobile device into a personal tour guide and it works offline, so no data plan is needed when traveling abroad.