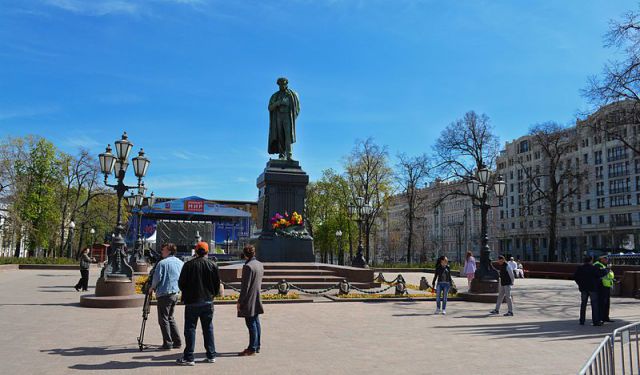 The Boulevard Ring is a beautiful part of Moscow. This pedestrian-friendly ring road was built where the city’s 16th-century fortifications once stood and passes through many sites of interest. It forms a semi-circle around the center of Moscow and is a wonderful way to explore parts of the city, unmolested by traffic. In 1978, the ring was granted the status of monument of the garden-and-park art, and consequently there are ongoing improvements to this famous leisure landmark.

During your walk, you will come across tree-filled parks as well as many delightful old buildings, including those of the White Town, Moscow’s historical district. A saunter along the ring, which is divided into several sections is a favorite leisure activity among Muscovites. In fact, “to walk along the ring” has long been an expression that is synonymous with fun and relaxation.

The ring begins at Gogolevsky Boulevard, next to the Cathedral of Christ the Savior and also takes in the reconstructed Apraksiny Mansion. This grand building is the former home of one of Moscow’s richest families in the 19th century. At the end of Gogolevsky Boulevard, browse the stands where painters showcase and sell their works of art.
Image Courtesy of Wikimedia and ProtoplasmaKid.
How it works: A discovery walk features a route using which you can explore a popular city neighborhood on your own. This walk, along with other self-guided walks in over 1,000 cities, can be found on the app "GPSmyCity: Walks in 1K+ Cities" which can be downloaded from iTunes App Store or Google Play to your mobile phone or tablet. The app's built-in GPS navigation functions allow following this walk route with ease. The app works both online and offline, so no data plan is needed when traveling abroad.